Last Wednesday my gaming buddy and I played several Legends of the High Seas Games. The first two being my own adaptation on the "X Marks the Spot" scenario out of the rulebook. Rather then just check the counters for the treasure and get it off to safety, I had devised a d6 table with events to be rolled upon uncovering a marker. This added a bit of narrative element to the game even if I had to explain some of them a bit more.

In the first game my mate's Royal Navy crew explored an island for treasure, meeting with a Non Player crew and trying to make off with the treasure. While he found the treasure fairly soon a lot of his crew-members were taken out of action due to some miserable dice-rolls. This he made up for in the subsequent "injury" and "income" phases of the campaign-play in which he earned some heavy duty treasure and kept most of his crew alive and even cured his captain's Madness by visiting the apothecary.

Next I played the scenario with my Pirate Crew against said non player crew. I found the treasure equally soon but was heavily set upon by the non player crew and a bunch of Natives appearing due to a bad marker-roll, this also accounted for another fun part as two non player crew-members were bitten by my Coral snake marker and died of the highly venomous creature. My income roll was somewhat less abundant then my mate's but all the same I got to recruit some more crew members.

The 3rd game was a regular clash between both our campaign crews, which I lost... how surprising... my Captain got injured (don't ask how) and the result of his injury-roll left him in sick bay so he was excluded from the next game. He did gain a 3rd wound (lifepoint) however so became more formidable nevertheless.

During the following day we played the "Kidnap the Governor's daughter". As Pirate I was the kidnapper to be. And 'wannabe' I remained because most of my crew got wasted. Well actually two members fled the field and one remained the sole survivor on the board after the rest being shot or stabbed to oblivion, which was reason enough for me to voluntary rout. I lost 2 crew members permanently... had to recruit them back and forgot to roll for some war-gear, dang!

As follow up for these games I will be converting a new Captain model to suit his new suite and parrot ;-) Also I want to do some more pirates and non-player crews, I am thinking of a Spanish Navy one and possibly a Chinese one.

When I have retouched the pictures of the games and figures I'll be sure to post them.

Cheers Sander
Posted by Sander at 22:01 No comments:

These pictures show some of the games of Warmachine we played. The games were played using 4 of the Factions of the Game to with Khador, Cryx, Protectorate of Menoth and Cygnar. Needless to say I lost almost all the games I played, nevertheless I had great fun since all these games have a great narrative value.
Posted by Sander at 10:57 No comments:

Since this Monday I'm with a good friend for a week of Wargaming Madness. Yesterday we played several games of Classic Battletech and Warmachine, the latter we played together with two other Palls Pieter and Mark; thanks for some great games guys! Here are some pics to give an idea of these very amusing games.
Posted by Sander at 10:53 No comments:

On request, some more Northwind Highlander mini's The first one is a Blackwatch Battlemech, followed by, how surprisingly: a Highlander mech and my Mobile HQ. 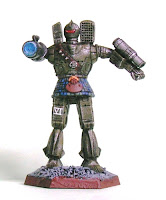 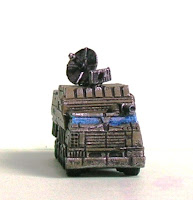