Just a fast post to let you guys know what's going on and what's on the Workbench. For everyone not interested in my Hero Quest and GIJoe shenanigans, rest assured some Historical works are being prepared as well. These include a Napoleonic 1:72 vignette, some more Indian Mutiny and Norsemen (Viking) miniatures and a big effort to get some work done on a big Historical project during the AHPC coming up this winter.

As I am rambling anyway, two matters I'd like to put forward here.
1) I noticed a drop of two followers on the blog, nicely compensated by the joining of two new ones: welcome Brummie and Paul! Is this due to Blogger and Photobucket playing up? Or is it due to the content of my blog? I don't mind people un-following, but would like to know why.

2) Lately I enlisted in quite a few FB groups, mostly closed ones, and in one of them I stumbled into a quasi serious discussion with a gentleman about the usage of the words "figures" and "miniatures" a.k.a. "mini's". He was quite adamant we should be using the word "figures", the reason for it as far as I could discern was tradition.
At the moment I did not have a backed-up opinion but have put some thought towards it and
- I now think thus: to me a "figure" (derived from the French Figurine) is a showcase figure, mostly of larger scale, mainly for contests and glass cabinets to be admired by all, not just as hobbyists. I am unable to produce these up to a standard I'd actually like to show them to the public at large.
- Miniatures are, imho, the figures we use to game with. In grosso modo, these are less well painted then the showcase figure and as such miniatures of the units we want them to represent. You could say to me figures are more like art, while miniatures are more like a tool or so. And yes, that's grossly unfair to both of the sorts of figure and to the people who are capable of elevating miniatures to art. Oh and see what I did there? I used both terms for the same thing: this discussion is SILLY!

Anyway, this week has been filled with knocking down the old garden sheds and getting rid of the debris they generated and some social stuff, but I did get the opportunity to prep some figures for painting.  I have done up a unit of GB plastic Vikings, some more IM figures and also some miniatures for HQ. The fun part of the Hero Quest project (or HQ for short)  is that it let's you go back to your old collection and re-use figures that have lain in a drawer for ages, unused and unwanted. I also obtained some great old figures I always liked but never had a use for some of these are pictured below for your perusal.

The first trio are some of my own collection's Pizarro's Lost Legion WFB Dogs of War. I sold some of them off a while ago and found these in a drawer and have decided to use them as mercenaries/ henchmen for my HQ heroes to hire. 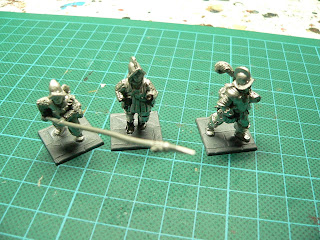 Some Pink/ Blue horrors of the Warp, I have always liked the old-skool look and the fluff behind them and now will paint one of both colours for special scenario uses. 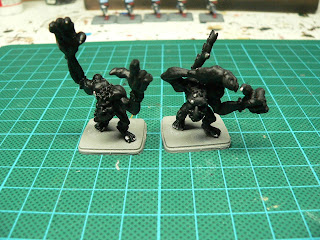 I want to change Kellar's Keep to an all-Orc quest and thus needed some Orc or Goblin stuff to replace the more vanilla HQ baddies. This Gobbo shaman and Squig Hopper are just the thing to spice things up. 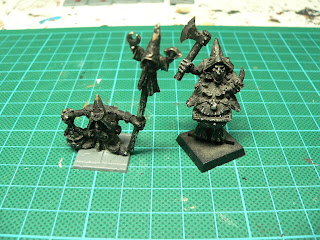 My old Aenarion and some new Hasslefree miniatures are next. The Elf will be used as a Dark Elf character and the two ladies as female stand-ins for the Heroes. The Barbarian and Sorceress. 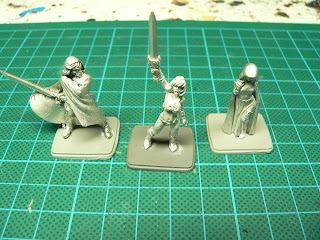 These heroes are the Zealot Miniatures renditions of the classic HQ, I like them. 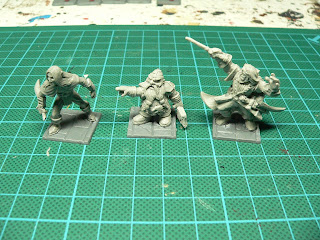 The next trio is for the baddies again. An evil Chaos Sorcerer that can stand in for all the ones mentioned in the regular Quests (I hate it when the rules state: use the Chaos sorcerer for this role). And some of the Dark Elf female characters I intend to use to customize the Elf's Quest. 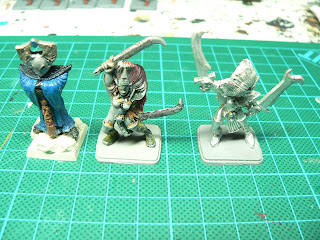 I have managed to obtain some of the Warhammer Quest extension pack figures, to whit: the Chaos Warrior (seen below), the Elf Ranger in the last picture, some of the Witch elves, the Imperial Noble and Elf Wardancer. I am happy with these because not only are they lovely figures, they are also great to enhance the HQ experience.  The picture below also shows Krell, the Undead Chaos warrior, which I also wanted for some time, but since I never played an Undead army had no use for. Now he will be leading my undead HQ legions for the Witchking. 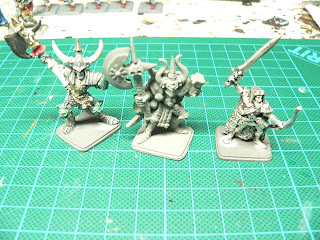 Another character that I have wanted for a looooong time, ever since reading Gotrek and Felix novels really, is Grey Seer Thanquol. I finally managed to scrounge him from ebay along with some other Skaven specialists to spice up the custom Skaven quest I found on the net. 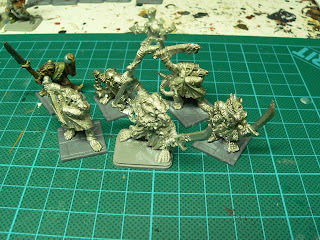 Last is the Elven WHQ Ranger and a Chaos Flesh-hound. The latter is needed wioth some beastmen (I will try to get those at Crisis) for a custom Beastmen Quest I found. See, you get to buy and paint all kinds of stuff you never had a use for and now can check whether you "can do them". It's kinda therapeutic I can tell you. 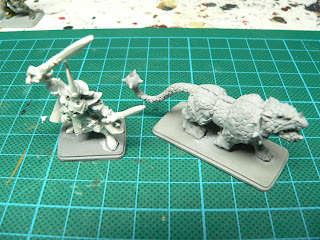 A last remark concerning these is about the bases. It will have been noticed by some of you that there are some figures based on the new Renedra Frostgrave bases and these are mostly my HQ troops/ footsoldiers or generic figures, the characters and figures that have a real HQ connection are based on Zealot HQ bases.

In some time I will reveal more of my plans for the AHPC but the first major happening hobby-wise will be the Crisis Convention in Antwerp in two weeks. The boy and me will go there and hopefully meet up with some of you there!
Posted by Sander at 11:15 3 comments: