Okay, I may have hinted that the battle was very one-sided and I lost very quickly but the battle was actually very tense and I did considerable damage to at least two enemy mechs. Engmir did however succeed in keep two of my mechs pretty much out of the battle by very sneakily positioning his mechs out of LOS.

The battle heats up as the HQ comes under fire. Dang, how I underestimated the little amount of armour this thing had! In the end it took Engmir about 3 turns of shooting before the thing was down, or rather blown UP.

For me the most fun part of the battle was when my Hatamoto Chi (the mech with the yellow crest looking like a samurai) charged Engmir's Enforcer. The Hatamoto did 40 points of damage amongst which was a hit to the cockpit and the result was that the Enforcer fell into the lake. A truly epic movie moment. 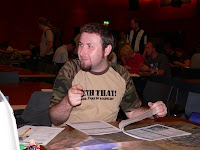 Yes I was very glad the charge succeeded. Usually my physical attacks go awry from the start...

A general view of our part of the DUCOSIM fair. There are usually 3 halls, one of which is reserved for wargaming. Games played include CBT, Warhammer Fantasy, WH40K, Warmachine, Battlefleet Gothic, Flames of War and the occasional Historical game (in this case an ACW game).


Special thanks have to go to Professor Tobias "Tobmeister" Wittwer for the pictures featuring yours truly!
Posted by Sander at 19:31 No comments:

Well today I played a very nice game of Classic Battletech against a very valiant opponent with the callsign of "Engmir". The scenario we played tasked me with the protection of a Mobile Headquarters vehicle (needless to say I failed in this task miserably)and of course my opponent had to destroy it. Here are some pictures!

The Enemy's deployment( protecting their supply of salad!)

My deployment, the large dark coloured hexes in the left-centre are part of a mountain...

Engmir's forces close in for the Kill.

Me trying to remember what point I was making...
Posted by Sander at 19:22 No comments:

No, I am not going to talk about early medieval times. I am going through, what in lingua Fora is called, a "Dark Age" a certain period of time in which you are not entertaining your hobby/ special interest etc. In my case I have not painted anything in about 3 weeks. A brush? What's that again?

My new work and some personal circumstances have resulted in this time of inactivity. I am very anxious to start painting again and finish some of the running projects most of which the several WW1 projects but when I get home I am far too tired to even open the paint cans.

The silver lining will be this weekend as I will visit the DUCOSIM games fair again for some games of Battletech. I will keep you posted and hope to have some pics.

Cheers Sander
Posted by Sander at 20:28 No comments: