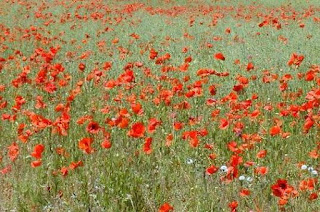 The Crisis has passed!

Yesterday I was in the lucky situation of visiting the Crisis 2016 in Antwerp. As always I went there together with my brother and this year, for the first time, my 5 year old son Arthur came along. Needless to say: we had a blast!

Upon arriving we had a surprise in store for us, because there as a rather long cue in front of the Waagnatie building. From event-reports online and in magazines I understand this is rather normal in the UK and US, but for me it was a first time experience and it did feel a bit silly to be honest.

Inside we made a round to pick up my pre-orders first, with these safely tucked away, I could now check my budget- balance and went on the hunt for bargains. While Arthur kept himself up admirably for a five-year-old in such a busy and impulse-rich environment, he did start to get itchy by now and I missed some shops like Annie's (Big Squido Games) and some others I would have liked to visit but that was ok since in the end I got almost everything from my wish-list. I missed out on paints and Valejo filler, but did find some much needed primer-spraycans for a bargain price.

As every year I brought my camera along, but 1) I am rather bad at making photographs and 2) the pictures in the magazines show up eventually so there's no need for total coverage of all things admired at the show. So I asked Arthur what he wanted to see pictures taken of. Here we go:

This floating castle was a brilliant participation game, I didn't catch what ruleset but it was really nice, one of the floating rocks contained a tower which in reality was a dicetower: very cool!

Arhtur really liked Sally 4th's new Amsterdam Canal Bridge. When I took the picture the very kind gentleman behind the counter explained he is planning a range of Dutch/ Amsterdam scenery to support the May '40 Dutch army miniatures also featured on this website.

On we went to see a lot of very good demo- and participation games.My son fell for the ones including trains and you'd be amazed at how many there were, about 4 had some.

My brother took this rather flashy picture of the lad and me looking at some display that had led's in it which made it attractive to little kiddies (of all ages ;-).

One of my favourites was this table of an early Roman army confronting other Latin tribes in a valley of well made forested hill-slopes. 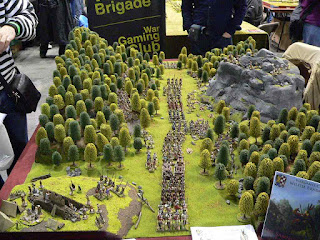 The bring-and-buy department was a downright mess! I'll get to to the ups and downs of this edition of Crisis in a minute, but I'd like to state that there was not nearly enough space to get through the throng and see the stalls let alone their contents. So I took the little one on my shoulders in order not to loose him and so he could see, which made for a funny picture.

Stefan a.k.a. Monty and his palls were there to with a wonderful 15mm Fantasy table. They are selling it as fantasy but it was just as rationally thought out as any of their historical games!

Apart from Stefan, I also met up with the guys from Crush the Kaiser but stupidly forgot to photograph their 1:72 Zulu War table!

Now on to the ups and downs. Ups:
- I was able to see everything I wanted in a reasonably small amount of time due to careful pre-ordering and keeping myself in hand and from impulse buys.
- The boy had a blast and when his mum put him to bed that night he was still going on about his great day, which says enough really.
- I got almost all items from my wish-list a first one yet again!

Downs, and I do realise these are rather personal so please do not feel offended if I state stuff not agreed with by you yourself.
- When entering the first hall of the building we were almost choked out again by the, sorry for the word, stench of the catering stand. I can imagine the food will have been very nice to eat but the hall reeked of cooking fat and grey clouds of smoke hung over the catering stand. This must be a highly personal experience by my brother and me and I am sure all you other visitors were not bothered by it, we were....
- An observation made by me and 4 others I spoke on the day was that the lay-out of both halls has been altered compared to preceding years which made the
convention unnecessarily busy, crowded and chaotic. Again it must be highly personal but I really felt rushed and claustrophobic at some points of the hall which I have never before.

That said they were only a very small part of an otherwise excellent day out. Sadly I didn't meet up with some of my regular friends at the show like Jan Willem, Koen and others but we'll see each other soon elsewhere I'm sure.

Let's have a look at the loot shall we?

In more detail now. Thanks to Johan I was able to replenish my Classic Battletech 'mechs store. A very good deal brought me a nice amount of mechs I haven't got or ones I like a second one of.

My 28mm projects were spoilt for choice this time round as well. I invested in some more Stronghold terrain figures for the Dark Age project with more characters from the "Vikings Series" like Björn, Aethelstaen and Floki. I also got a female champion, -banner bearer and some more civilians (the latter from Foundry). I also bought a Warpainting booklet on painting the Dark Ages, more on that later when I have finished reading it.

The biggest winner this day must be my 28mm 80's pulp project. A truck from Rubicon models will give me an useful scenario objective. From the nice people at Crooked Dice I obtained their new landrover defender and policemen, divers, ninja's, Thuggees and some villains. These will be reinforced with some figures from Spectre miniatures and the nice SUV they sell.In all a very nice haul I reckon.