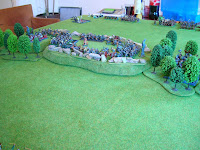 The Dwarf host moved little to nothing since it was in a decent position from the start. In the shooting phase all weapons were let loose but the only mentionable effect was that, right in turn one, a unit of Skaven Jezzails was hit hard and fled the field.

The Skaven Doomwheel moved a whopping toward its enemies and the rest of the army slithered forward in an all out push towards the Burrial Hill. Skaven shooting claimed one Iron Breaker and two thunderers killed by the Gas Mortars. In the magic phase the Skaven wizard managed to miscast and wound himself.


Vampire Counts:
The Necromancers succeeded in summoning 20 more skeletons from their graves.
Brettonians:
Moved in a better position.
Turn 2
Dwarfs:
Pretty much all of the Dwarven units remained in their positions excepting the two units of warriors in the woods who went for a pick nick of to their left.
The Dwarf Shooting was even more in-effective then in turn one.

Skaven:
The Skaven proceeded with their general advance and did pretty much nothing more noteworthy this turn. 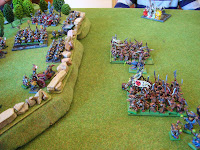 Summoned more skeletons and moved towards the Dwarf left flank.
Brettonians:
The Brettonians declared 3 charges against the Dwarf positions directly in front of them:
- the Questing Knights charged a unit of thunderers and overran into a bolt thrower behind them.
- The knights Errant overran the Dwarf cannon into the flank of the Iron Breakers
- The knights of the Realm overran the bolt thrower and ended their pursuit move in the middle of a Clanrat unit. The Coalition had effectively ended. 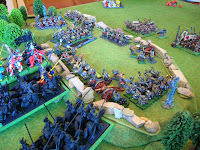 
With most of it’s missile units dead and the others doing pretty much nothing a unit of Dwarf Warriors with great weapons charged the Doomwheel, defeated it in combat and overran it in the following pursuit. The charge in the flank of the Iron Breakers with the Knights Errant causes 7 dead Dwarfs and the unit needs to roll a double one on their break test, which they surprisingly do! The battle goes on. 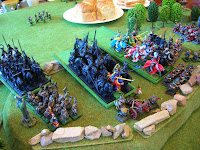 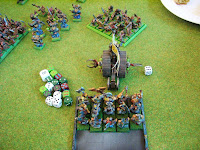 Skaven:
The Unit containing the Skaven General cause a fear test on the Questing knights and they choose not to stand before these terrible enemies. The Knights of the Realm with the BSB finish their battle with the Clanrats in a draw.

Vampire Counts:
Relentlessly the Vampire Counts army draws closer to both the Dwarfs and the Skaven. Who will they attack? In their magic phase the Necromancers create yet more skeletons. Swelling their ranks even more.
Brettonians:
Nice shooting from the Trebuchet kills 10 of the Dwarven Kings elite bodyguard hammerers. Due to the kings’ leadership they make their test.
The Knights Errant leave the Iron Breakers in a scatter of little mangled heaps of gromrill and overrun into the Skaven Globardiers.
The Pegasus riders try to charge the Skeletons, but sadly fail their fear test and so the charge dissolves. 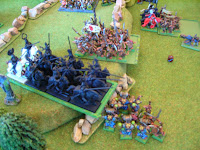 Turn 4
Dwarfs:
The only action worth mentioning is the charge of the warrior unit with great weapons into some Skaven slaves which end in a locked combat due to the high amount of Skaven ranks. 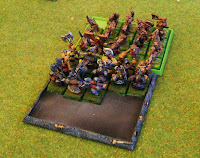 Skaven:
The General and his unit, broken in combat by the Questing Knights fail to rally and keeps fleeing. The combat between the slaves and ends in the Dwarfs defeating the latter but this causes the slaves to explode! In the ensuing ravage one dwarf and a Skaven Gas Mortar are blown sky high.

Vampire Counts:
One of the Necromancers tries to cast a magic missile on the Pegasus Knights and miscasts. The Miscast causes him to sucked into the Warp. In the following combat the Knights manage to kill 3 skeletons but the battle ends in a draw.
Brettonians:


The trebuchet proves its worth once again by destroying the Warpfire thrower.

Turn 5
Dwarfs:
The King and his retinue charge into the flank of the Skeleton unit in what seems some sort of agreement between the Brettonians and the Stunties. Together with the Brettonians the Dwarfs kill 18 skeletons.

Skaven:
The Skaven General manages to rally his troops just short of the table edge.
Vampire Counts:
The Necromancer tries some spells on the Pegasus knights but either fails or is dispelled. The Knights cause some more dead skellies, the combat remains locked however.


In their close combat phase the Brettonian General kills the Skaven Wizzard and overruns into the gas Mortar behind him. The Pegasus Knight Champion issues a challenge to the Necromancer who cowardly refuses and flees to the back of the unit. 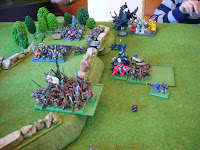 Turn 6
Dwarfs:
The last remaining large unit of Dwarf Warriors ascents the Hill in support of the Organ gun to claim the prize of the battle. In the Close combat phase the King challenges the Necromancer who has nowhere left to run and accepts the challenges. The king kills him of swiftly and together with the Brettonians finishes off the remaining skeletons.
Skaven:
The warlock engineer skitter leaps onto the mountain to gain some prestige. In order to reduce the Dwarf’s chance to winning he tries to throw a brass orb on the unit of Dwarf Warriors but … blows himself to the giant thread wheel in the sky.


Brettonians:
The Questing Knights finish off the fight with the Gas Mortar crew and keep from pursuing off table.


The Dwarfs remain triumphant on the Hill of their forebears.
Listening to: "Chronicles of Dysphoria" by Chalice