Yesterday Arthur and myself visited the IMPACT convention in Eindhoven; we had a blast! It's only a short train-ride to Eindhoven and we like using the train since it gives you time to see a lot and play games during travel. Anyway we arrived a little early but the doors were open and we went in immediately. I met a lot of familiar faces and had to catch up with them and talking with grown-ups about boring stuff is not something that allures to a 5  year-old, so I gave Arthur my camera and off he went to make pictures. These did not all work out for the best but I'll include some here for good measure.

IMPACT is not the largest event one could visit but one of the most enjoyable and laid-back ones I know. There was a fair amount of dealers, who supplied a great deal of different games and stuff but also a lot of bargains at that. The demo games are all of very good quality and quite a lot of those were also on show at Poldercon. After circling the room about 3 times and buying all the items on my (rather short) list, we went to Jan-Willem for a chat and a drink and on we went again. After checking out the tournament hall and the Bring and Buy we met up with Johan and enjoyed a good beer (no Arthur just had an Ice-tea) and looked at each others loot and chatted for a bit. Inspired by Johan's buys I went back for a quick check of two stalls while Johan watched Arthur and apparently gossiped about me...  oh well.

After that the two of us went into town and got the boy a toy-truck and some presents for his mum and brother. We had some great fun together and some real quality-time, the experience will keep me going for quite some time yet.

On to some pictures! 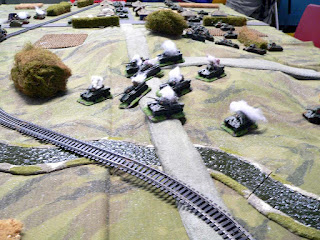 Arthur loves trains, even armoured ones... 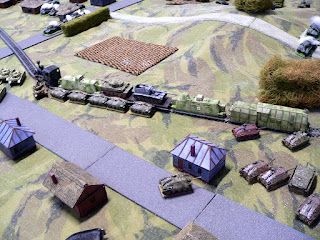 A look into the hall, as we arrived early some people were still setting up. 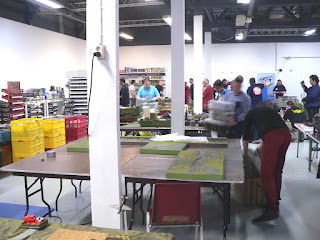 The shady figure in this picture is  Jan-Willem, who's trying to wave. 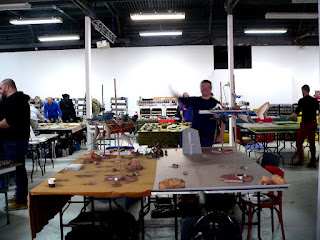 Pirates are always great and Arthur was quite intrigued. 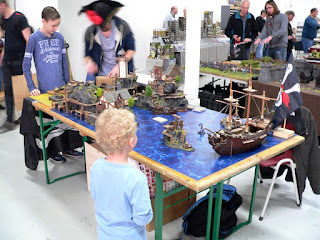 He liked this house and was rather disappointed I did not want our house to painted this red... 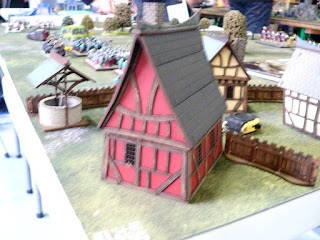 I have no idea what game was in progress here but the brightly coloured units attracted the lad enormously. 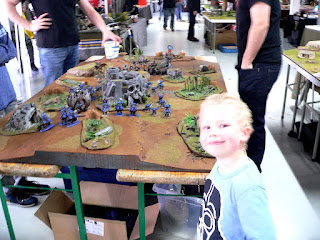 Arthur likes the landscaping aspect of the tables more than the actual miniatures and so he made this picture. 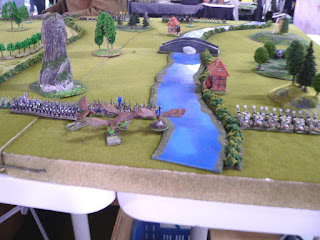 This Golden Hall of Meduseld was actually taken over by Russian Civil War troops duking it out! 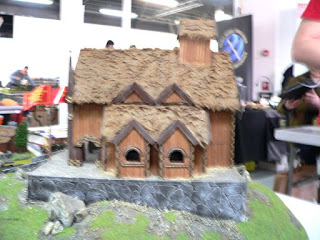 A rather splendid Alexandrian Successors battle in progress. 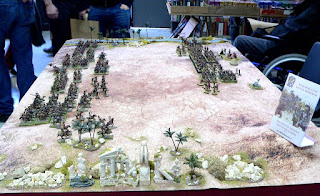 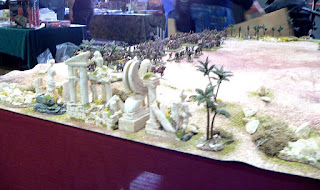 This table, by Alde Garde, was great to but Arthur did not get the pictures too sharp and I forgot to take better ones. 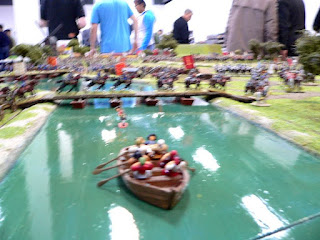 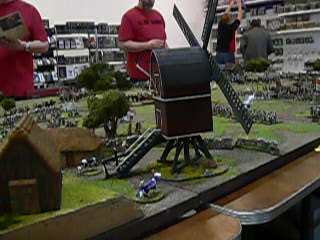 I met up and had a chat with Sander van der Ster from May 40 miniatures. His line of 1940's 28mm figures is really good. To be honest there is some flash and mouldlines to take care of, but when you do you have some really amazing figures which are absolutely historically accurate! 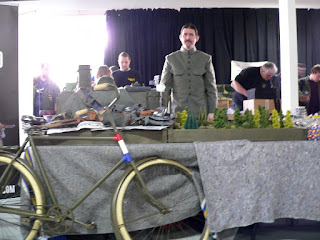 Mister Ludwig's Arnhem diorama never stops to amaze with all the buildings immaculately researched, 3d designed and printed before painting and placing in the proper spot. 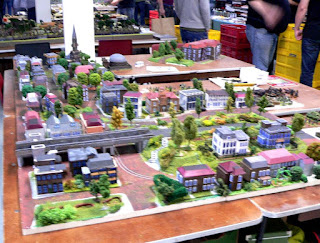 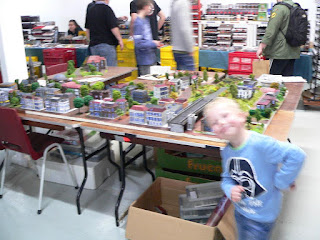 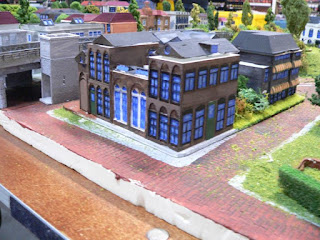 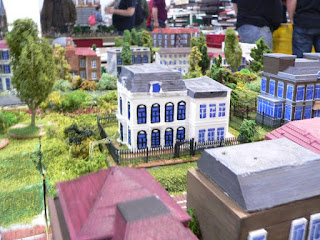 Our drink at Jan-Willem's table, the soda was rather peculiar but it tasted fine. 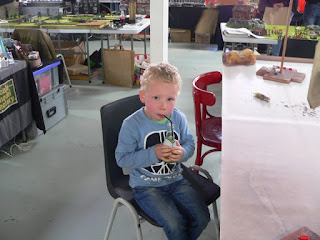 A post-apoc skirmish battle was taking place here, I think it was at Poldercon too, but I forgot what ruleset. The terrain however is superb and the flickering lights attract youngsters by the droves ;-) 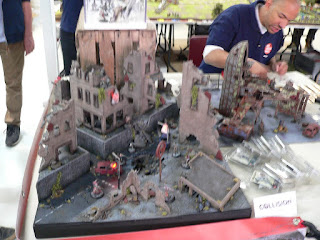 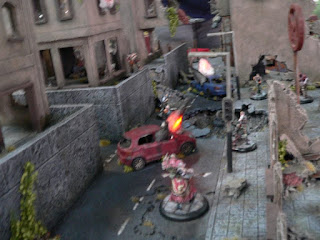 Mister Bazelmans wins the table of the day-award as far as Arthur is concerned since "he had those pretty trees all lined up and stuff." 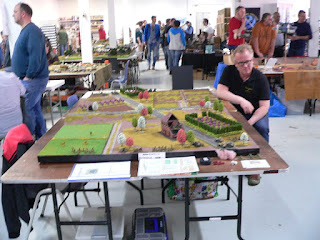 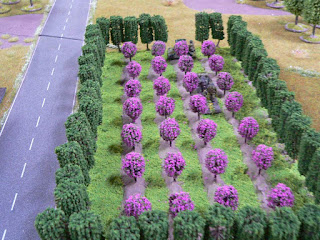 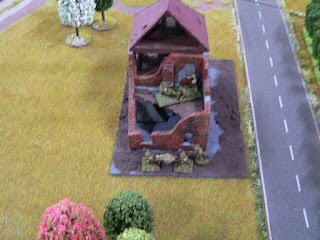 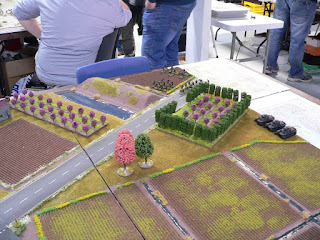 His representation of the German invasion of Zeeland in 1940 and the French trying to help us Dutchies out, is really nice and accurate down to the traffic signs of the day itself.

Now what I turned up with regarding loot? Well this bunch: 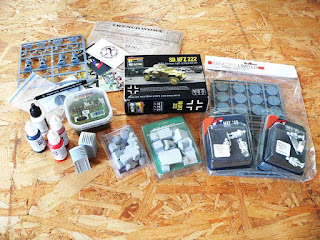 Some paint, a brush (Kolinsky Rotmarder), scenics from TTCombat, some flock, bases from Renedra, May40 miniatures (officers and stretcher bearers) and a German Armoured Car to support them in May 1940 invading the region I live in... hmmm sounds ominous. The other stuff is part of the goodie-bag we got upon entering. While Johan got a sprue of Warlord US Marines I got some more Early Roman legionaries, great I now have 6, because I got two in the Poldercon bag.
Thanks to Jan-Willem I also got a nice jungle. Okay to be fair it still needs some work to be a jungle, but the start is there! 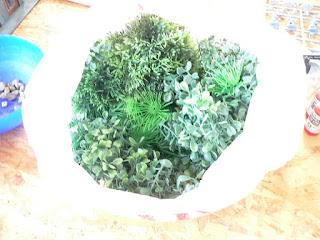