Back into the fold?

It was about time I'd put up a new update. As promised last time; let's delve deeper into my hate-love relationship with GW. My love for historical miniatures out-dates my love for sci-fi and fantasy mini's and as such will always be the mainstream of my hobby-efforts.
That said my first gaming experiences were with Warhammer 40K when at high-school, somewhere around 1995 I came into contact with a few Tyranid and Ultramarines players.I still have very fond memories about that first game, which actually are a great starter for a future blog post come to think of it.
Starting out small with Space Marines of a home-made chapter, I soon turned my attention to the Dark Angels upon reading a White Dwarf containing some Dark Angel artwork showing Interrogator Chaplain Asmodai specifically. Over the years my Dark Angels army grew and both an Imperial Guard- and  Sisters of Battle army were added. 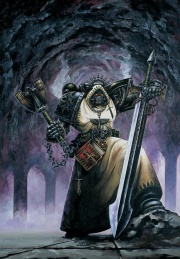 For about 8 years I have lived in Groningen in the North of the Netherlands and it was there that I was really initiated in the wonderful world of tabletop gaming. Thanks to Albert Martijn I started playing 40K and Fantasy (Dwarfs and Empire) in earnest, followed by Classic Battletech and a small and short-lived venture into Warmachine.Since I now had a regular gaming partner and an income of my own the GW ranges formed the mainstay of the hobby.
During the last years in Groningen my gaming network expanded fast and interest in the historical period blossomed accordingly. I found out about playable historical rulesets like Warhammer Historicals and The Great War.White Dwarf lost it's main characters like the Fat Bloke, Gav Thorpe and Andy Chambers and turned more and more into a full blooded catalogue with some méh-méh articles mixed in for not-so-good measure. The emphasis of my hobby started to shift away from GW's flagship games toward the Historical variants. What irked me the most were the facts that most GW armies leaned heavily on super-heroe- characters and pimped up über units with through-the-roof statistics, this while the WH Historical rules gave you just regular Joe's with crappy stats and even the elites were not thát great.Now instead of winning by compiling the most perfect armylist and not even shooting so much as one bolter, I had to rely on my wits and strategic insights. So I still lost big-time but I enjoyed it far more because I now had a starting chance when the game began. Another issue was that most 40K games and nearly ALL fantasy games ended in a draw, I really hate draws as a result specially when almost both your entire armies lie dead in the field.

Upon moving back to Roermond, the main audience of players was...non existent. Well I had not found anyone yet to game with. After a small time I met Mark, who's a staunch Skaven player and has, I kid you not dear friends: just ONE army... yes he just has this huge Skaven army but nothing else. Oh yes a small fleet of space ships but that doesn't count. So back I was with GW WHF but the great part was: Mark was just in it for the fun. His Skaven's motto is: I won't fight anybody armed with more then a kitchen knife so my Dwarfs have had a field-day by thrashing his rats around the field of battle and even occasionally charging in! Every 3 months there's this small gaming convention in Amersfoort, the DUCOSIM, where I was able to keep playing CBT and it was there I met Jan Willem (Pijlie) he was into just about anything cool. In whatever scale and setting that could be whipped up. He now turned out to be my new partner for anything historical, soon followed by Koen.

Now with that settled I ditched the White Dwarf subscription, changed it for a Wargames Illustrated sub, best swap ever, and am now safely entrenched in Historical gaming with Black Powder as main ruleset.
So why this whole tirade? Well lately I sold of pretty much all my Imperial Guard stuff and was left gazing at my Sisters of Battle and Dark Angels, to sell or not to sell, that's the question.Why sell anything in the first place you might ask? That's easy: I am narrowing my view on the hobby. It's impossible to keep on doing all different things at once. Not in the last place since I have a limited space available in my hobbyroom. The mainstay armies will remain the Historical ones; Napoleonic, 7YW and TGW. I sold quite a lot of loose ends already like the Assyrians and my ECW Royalists (who by the way will be featured as Spanish in a diorama showing the battle of Roc Roi at a museum in said place itself). The SoB's are just a brilliant and terribly underrated army and all these lovely metal ladies have been so painstakingly painted that I cannot say farewell to them at this point in time.

My Dark Angels are just that; my little Angels, there's no way in Hell I'm going to part with them. Yes most of them are painted in a horribly outdated style and based even worse but they remain my first brothers in arms even though the existing codexes are shite I will not part with them anytime soon.

Recently the release of Dark Vengeance renewed my interest in them. Albert Martijn sent me the limited edition Chaplain included in Dark Vengeance and seeing the quality of the plastic I really new that a version of said boxed set would be obtained eventually. The renewed interest has led me to start painting up some of the Dark Angel models lurking in my cupboards unpainted for ages. I still had about 15 Deathwing terminators left. 5 of them old metal ones and 10 new plastic terminators. The former now are done and feature down below.

To cut a long story not quite short: let's finish what I have lying around and see what will happen in the future. The Crisis is just a week away after all...

Here's a shot of some of my old and already painted metal Deathwing, they're done over an ice-blue underground which turned out all wrong. Seeing my new ones I really need to strip these and get them re-based and re-painted.

Some of my old plastic terminators, the ones with the swivelling torso's, Space Hulk issue?

Now for the newly painted terminators. I used an Army painter Rat-fur basecoat and worked up from there. The models, as said, are old metal ones including two sergeants since one of the squads above misses it's boss.

I've done the bases the way I would for historical mini's and in hindsight I should have left off the flowers...

Some characters in terminator armour were already in my showcase, but now I'm wondering whether I should re-do them as well, what do you guys think?

That's it for my trip down memory lane, sorry to have taken so much of your time, but hey you could have stopped reading ages ago ;-)

Listening to: "Skyline" by Yann Tierssen