Another year has gone and passed and so it's on to the numbers of painted figures from 2022. Before I will go into that I would like to wish all of you the very best for 2023!

Gosh, I am not really sure what to think of the above. Clearly Blood Bowl is the overall winner this year as far as the amount of painted miniatures is concerned, but that's not strange considering I have painted up quite a lot of teams for others this year.

Heroquest is an important part of last year's output and it will remain so this year all be it a bit less I think, there's the re-release from Hasbro that I am painting up for Martijn as well as the expansions of the same producer, but I have no real plans for the game for myself.

40k and Fantasy are an important part as well due to the Necrons I have painted for Martijn and the great Fantasy stuff I have been adding to various games. New is Star Wars Legion which I have not only painted for Roel, but also since Arthur and myself have started to play and paint the Republic era SW game, watch this space for more to come.

Talking about the future, 3 very big projects will be keeping me busy in 2023:

- I have started an army for my beloved First Legion, the Dark Angels will be entering the fray of the Horus Heresy in the 30K universe.

- Mordheim has gotten me and Arthur in it's grips as we are battling our way through to City of the Damned towards a huge pile of Wyrdstone.

- Finally I am eagerly anticipating the release of Warhammer the Old World by GW and have started painting up some old Bretonnians I had lying around, got given by Mark and bought online.

So that's the Old out and the New started for me, keep tuned for more posts as I am currently participating in the 13th Analogue Hobbies Painting Challenge! 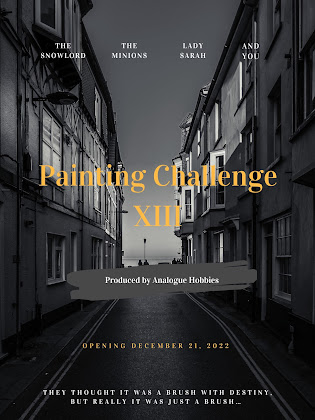 The Necrons shown here were part of my Indomitus Boxed set, while I had fully inetended to keep them myself and use them in games with Arthur, I found myself thinking they would be far better suited to be donated to the gaming club were more people can enjoy using them so I made a donation of them to our founder and chairperson Martijn who has now put them up at the club! 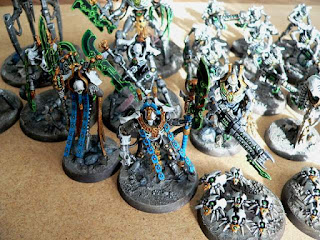 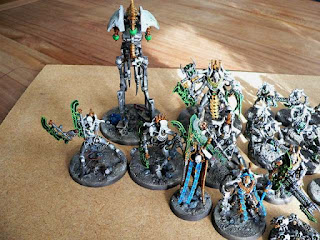 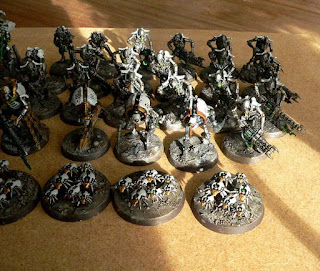 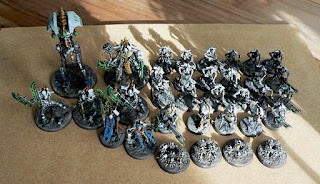 I really liked painting the simple yet clean and cool scheme of white, green, silver and gold.  Hope you like them too.

The last of the SW Legion commission work is this brilliant little landspeeder model. I had such great fun painting it, from coming up with a scheme right up to doing the rust and other weathering effects on it. 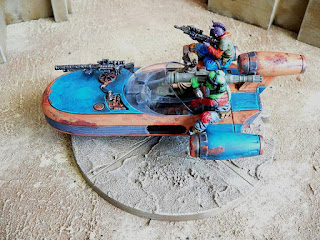 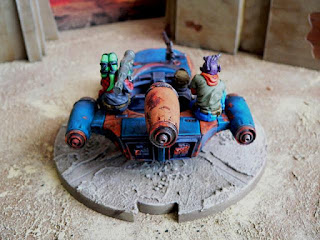 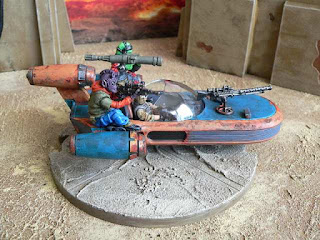 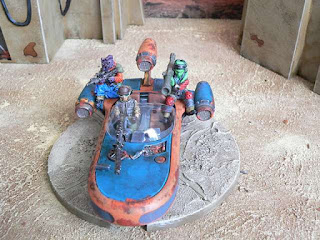 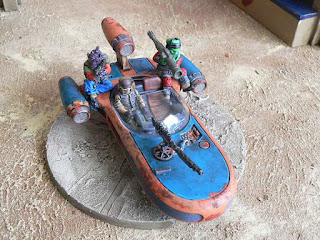 This is just such a nice little model that if I were to get one for myself I would probably paint it like this yet again.

As promised more SW Legion today! These figures are the box of Rebel Veteran Troopers, all done up in hot weather gear complete with Harry Potter scarves, just for fun. 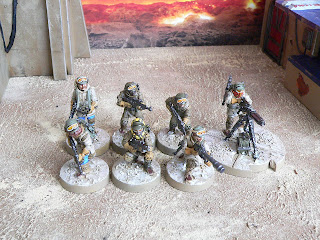 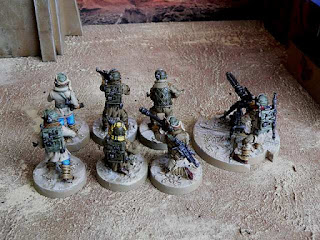 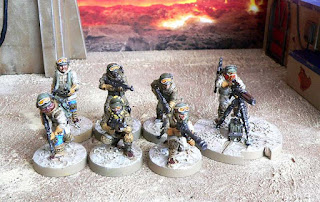 What I like about these Rebels is the combination of military gear and sci-fi civi-clothes, you can do just about anything you like with them colourwise.

Let me show you more figures from the SW Legion commission. Roel, the client, asked me to paint his Taun Tauns up desert style, as I had to paint all his stuff and this surely made for a nice challenge. The colours of the uniforms resemble a hot climate better and so do the basis. Since Roel is a big Harry Potter fan, I painted up one of the scarves as a Ravenclaw one. 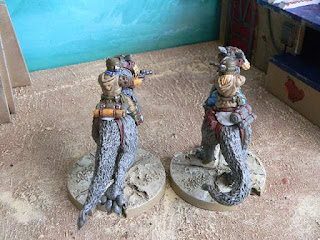 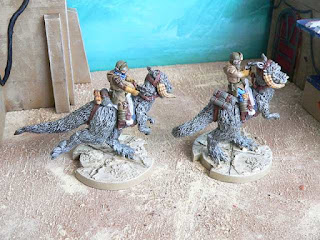 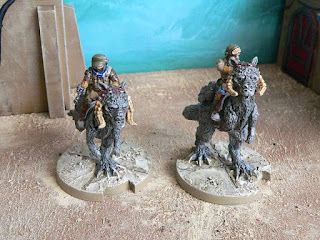 These miniatures were a joy to paint with loads of different textures and great details. Next time more Star Wars miniatures!

Even though it has been some time since my last post I am still around and painting some miniatures. Just lately I have finished off a huge Star Wars Legion commission and I would like to show you some of the figures I did for that job. First up are some Mandalorians and Death Troopers 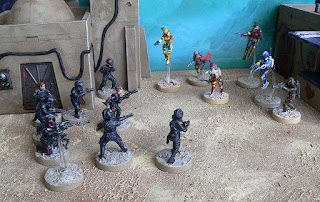 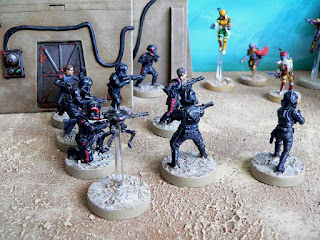 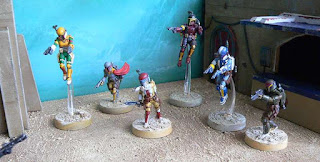 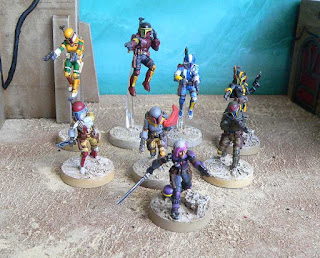 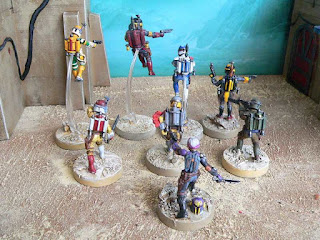 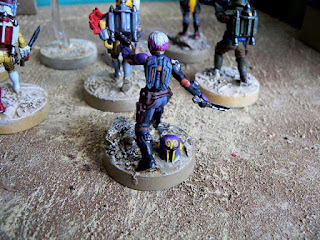 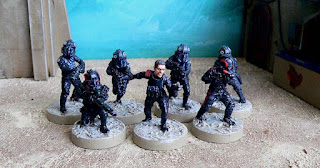 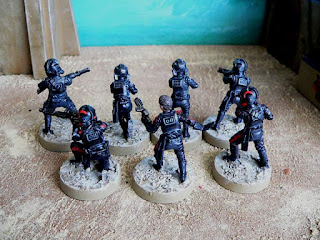 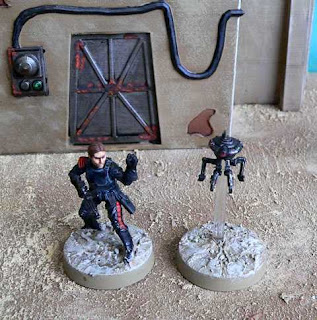 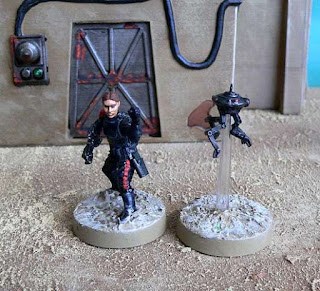 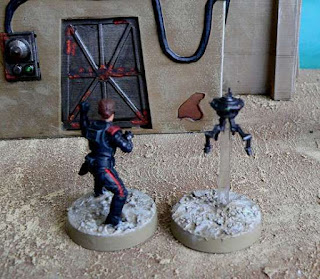 The terrain is made up of two 3D printed Tatooine buildings and my usual desert boards.

See you next time!

By now you will have realised that I didn't overstate it when I said "Blood Bowl Craze" since here's more Blood Bowl stuff for you today!

First up are a Rat Ogre I have painted for Mark and a referee I did for myself. 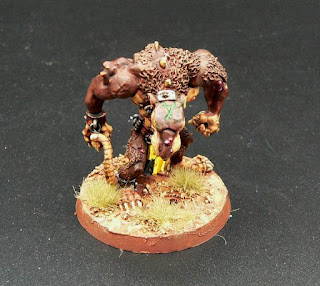 The above was my last regular Challenge post, apart from two special ones (which I will show you later in more detail) and the "wrap up post".