Painting of the French Marines has been going on steadily, by now about 40 are finished. Here's the latest batch:

And the guys all together sitting in my showcase waiting transport to dear old Albion.

Listening to "Mother Earth" by Within Temptation
Posted by Sander at 12:35 5 comments:

Last Saturday I went to the Ducosim games convention in Amersfoort and played a small Classic Battletech game with Michiel and Marnix. Marnix and myself represented a Clan invading force who had to destroy and capture several IS buildings. I went over there with a combined star of mechs and elementals not fully realising I would be using just 1/3rd of my force. That had been stated in the mission scenario but I did not fully comprehend what it meant for the game.

I ended up using just my Summoner in support of Marnix's Locust IIc and another second-line mech whose name I forgot. We decided that we would try to divide Michiels force of 5 mechs by sending all 3 of our mechs on a different route and this worked fine until Michiel realised what was happening and in true Innersphere surrat style focussed all his fire on my Summoner who held on for about 4 turns under humongous incoming ordnance before succumbing and the pilot ejecting.

My Summoner targeting the observation post while Marnix blasts the depots 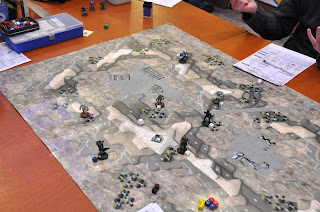 Marnix and me deciding our next move 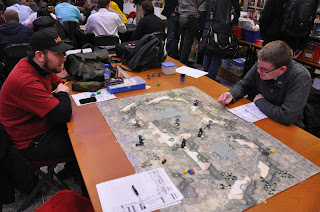 My Summoner in action 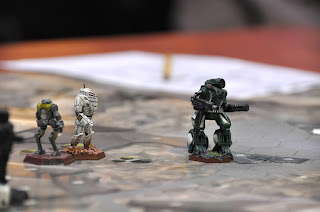 A brave last stand... where's the cavalry when you need them? Oh forgot: always late! 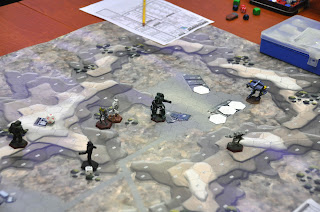 Well we had a blast (pun intended) and since this was the start of a mini-campaign of sorts, you can expect to see more here.

Listening to: "Immersion" by Pendulum
Posted by Sander at 15:03 1 comment: