For another update on my progress in painting my Challenge targets you can see quite a lot of Great War eye-candy over at the Challenge blog HERE.

Last Sunday I attended the Dutch gaming convention Poldercon for the first time. Organised by J-W (his family and sundry others, whose name I shamelessly forgot) and driven by loads of motivated gamers demoing a great variety of different games. The basic idea behind this convention is that everybody attending plays games, no walking around and looking-on, everybody registers and has to write in for at most 4 games before the convention.. There are 4 game-rounds, but luckily I only registered for 3 games so I had some spare time on my hands. Arriving late due to public transport troubles I jumped right in for what was to be the most lasting impression of the day: Dux Britanniarum. Hosted by Peter, it was a short game to get the hang of the basics of the game. At first I thought the "shock" system was a bit much as far as bookkeeping is concerned but later games and glimpses on different tables soon told me differently. It is really rather elegant, but needs a home-made laser-cut counter...
Anyway, together with another player I was in charge of some Britons bravely defending their coastal town against Saxon raiders. Our levy got clobbered by the Saxon warlord and retinue, but when our Lord and his elites showed up, we totally bashed the Saxons elite troops. Sadly his lesser minions were ransacking our dwellings and running away with the booty. But who cares? It resulted in me placing an order with GB for the rules and some more miniatures. JW you did it to me AGAIN! 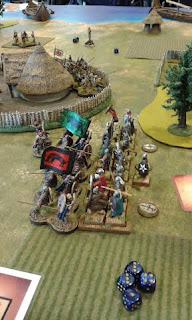 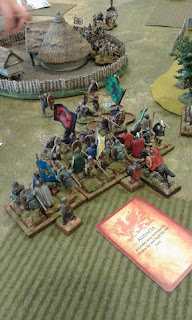 Peter was the ever gracious host and he presented us with a free sprue of Dark Age troops afterwards! I got to talking to him some more and gained some advise on the game and the figures/ scenery he employs great stuff indeed!

On to a nice lunch over which I talked about the con with Koen and Johan. Afterwards some shopping and two more games. I bought another box of Viking Hirdmen in plastic, damn! I actually wanted to buy the plastic Saxons but got the wrong box.. two sets of Renedra wattle-fencing and a pot of Valejo structured paint.

The 3rd game I played was Bushido. I really like the miniatures and have always had a soft spot for Samurai/ Feudal Japan. So I jumped to the chance of registering for a game of Bushido. Ably guided through the rules by Stefan, my opponent and me had a blast using 3 figures from different factions in order to get statues to align with our side of the board; and a very nice board at that mind you! We had enough time to play 2 games so switched factions between games. I lost both of them but could have won, had cooler minds prevailed. 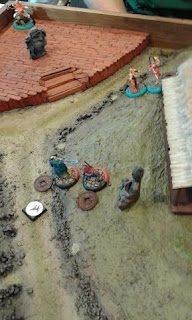 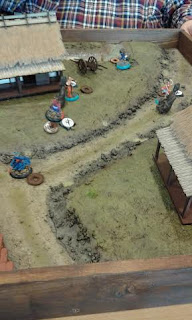 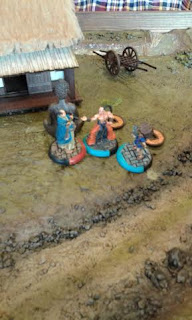 All good and well, but the conclusion is: I will not be buying into this game. The figures are nice and I might acquire some for use with other rule-sets but there's just too many special rules, abilities, tokens and other such stuff which keeps me from doing what I think is a game: playing tactically on the field of battle. I like to use my brain while playing but more on the lines of: "where is this unit of skirmishers needed most and where do my elites have to put in their punch." rather than  "figure such-and-so has that special ability and if I boost the roll by buying another die with some ki I have collected I can counter the enemy's figure such-and-so's sweeping attack ability." The same is true for warmachine and Dystopian Wars: you have to have all kinds of miniatures to get a diverse force and remember all your own special rules and those of all the enemy factions as well to get the best results. That's not for me!

Last but certainly not least was a game of Strange Aeons. A skirmish game set in the Cthulu world. Just like with Dr Who, Star Trek and Stargate: I cannot get the hang of this! What is the fuzz about these? What they have in common I guess, is too much science and too little military actions. But I am always looking for the perfect skirmish ruleset and wanted to broaden my Horizon so I registered for this game demonstrated by Marijn. He was pretty enthusiastic and this was rather catching. 4 players were divided into 2 good- and 2 badguys and I was one of the goodies. The goodies (the "special" branch of the secret service) had to save a hermit from some cultists out to get his knowledge of releasing the Old Ones. Anyway, what was soon clear is that my figures had all been equipped with firearms only and when attacked by a Migo (is that the right spelling?) I now know you should shoot him down in close range with a shotgun... I know because I failed and had to live with the consequences. What happened? The Migo attacked my Tommy-gunner, in close combat I rolled really high and managed to fight the beastie off. Sadly since I had no handweapons, I had no chance in hell to damage the thing. The Tommy-gunner fled and I wanted to shoot down the horror with the shotgunner. He hit but didn't do enough damage. The hero with his two pistols didn't do any damage either and so I remained in danger in, what was effectively my deployment zone, for the first 3 rounds. 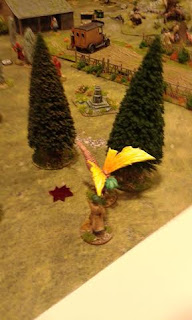 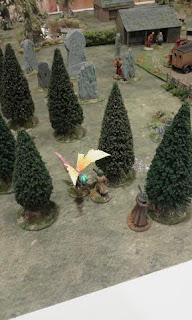 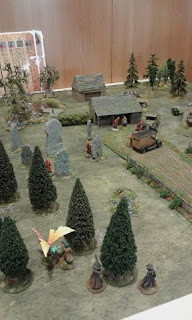 These rounds ended with only my leader still on the board and that was the situation when I had to leave the Con with Johan as he was my ride to Eindhoven station.The fact I had to have Marijn telling me what scores on the dice was needed and that modifiers are added in at least 3 different stages of combat, made this a no-brainer for me: too complicated! Don't get me wrong: the table was splendid, the miniatures painted brilliantly, but nor the setting or the rules really do it for me.
All the way back we had a good talk about just about every thinkable (gaming) subject and I enjoyed that quite a lot.

So a truly great day was had! Upon coming home, I found out I ended up 3rd in the AHPC bonus-round, so yeah I really had a great day and hope to be able to join next years gaming!