It has been quiet here for some time, not because of lack of interest but because of a bad case of the flu which is still pretty much wearing me down. Anyway I did do some little things hobby-wise.Firstly, before the flu became too bad, I managed to paint up some more Vikings for DB. 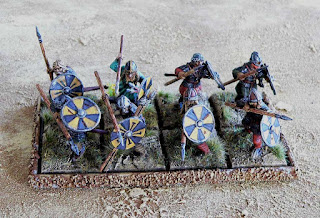 The shield design is that of Jarl Borg, one of Ragnar's most devoted adversaries to be used as an opponent to Ragnar when playing little skirmishes or as part of the DB army when they go raiding together. 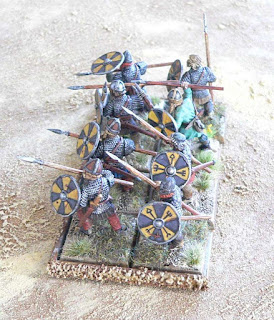 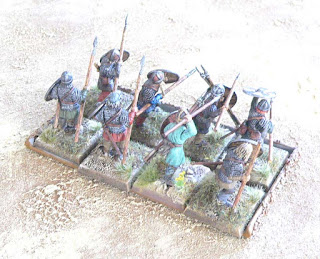 Somewhere last week, the Death in the Dark Continent Nick-starter package fell on the doormat. It's a great, hard-cover, book with loads of brilliant pictures and fluff as well as very good army-lists. I am not persé for gaming Darkest Africa but I am all for gaming Colonial games and the rules do look simple enough even for me. One little niggle however is the basing method on specifically 60mm x 50mm sized bases with about 2 to 3 mini's on them. I do not like this way of basing since I like my games to be representations of battles not representations of battles via the vehicle of a boardgame. That said, I had enough plastics lying around to have a little try-out and will paint them up when feeling better. 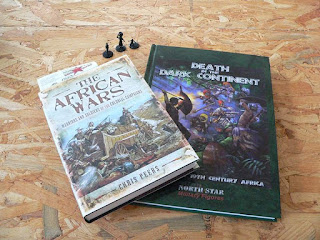 Inspired by the March release of White Dwarf I also painted up 5 Dark Angel Space Marines, the inspiration dried up almost immediately after painting though and I cannot even be bothered to put up pictures of them here.
Don't get me wrong, I still like the mini's, but seriously another version of WH40.000?!

Well on that bombshell...