Read all about it!

Let's talk magazines today. I've been a loyal subscriber to Wargames Illustrated (WI for short) for quit some time now and last month they released their jubilee 300th issue. It has a whopping 300 pages of wargaming niceness. Now to be honest some of these pages are filled with advertising but this is to be expected and these are the kind of ads I do not object to. They keep you posted on new firms and releases in the hobby and allow the WI crew to keep producing their magazine which is fine by me. 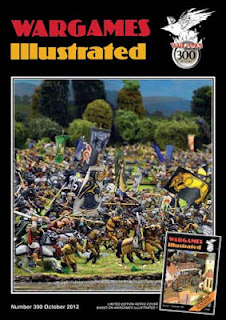 Now when WI had a change of management some years ago and Battlefront took over I was terribly afraid that they would go the way down to White Dwarf level; i.e. become an one-firm advertisement catalogue. Now the chaps at WI have managed to steer well away from that course. Yes they do have a lot of Battlefront related articles each issue but they are only to be expected. Apart from that the articles contain just as much background information on WW2 as gaming intel.
The 300th issue brings us the "Heroic Last Stand" theme and is brimming to the rim with great articles about all kinds of last stands in military history. The article I liked the best was the one about the shortest war in history, I won't spoil anything just go and buy the mag yourself. The cover is done up in the old fashioned style which I liked better then the present one but hey one cannot complain. Let me rephrase that: the cover of the subscriber's issue and the one available on-line that is, issues sold at newsagents are done in a different cover.
That brings me to a question I have wanted to ask for some time, since we left London actually; where do you British gamers obtain your hobby magazines? Waterstones doesn't carry them nor does H&S so please let me know!

Talking about White Dwarf earlier brings me to the second magazine I want to discus. From several sources I've been informed that White Dwarf has changed it's team and format. I checked several on-line reviews and decided to buy one myself and get to the bottom of it. If you want I can give you a statement that says it all: the magazine is lying somewhere in a box with some advertisement folders and I haven't finished reading it yet.... 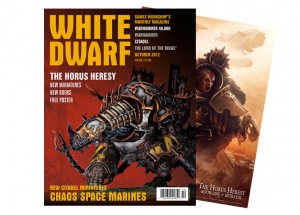 Now while the  new look is a little more grown-up I really liked the very old "Paul Sawyer" style, with drawings of Grombrimdal and some Gobbo's along the edges of the pages etcetera. That said the magazine has managed to make it look as if it is NOT an advertisement catalogue even though it really still is. Instead of just listing the new releases  and stuff they are now introduced in an article by the Dwarfers.The greatest disappointment to me is the battle report. The new Chaos Codex is showcased in it but loads of new mini's and special rules used in the game are not mentioned or explained.

My big problem with anything GW is this: the OLD GW universe (and for me specially this is the 40K universe and in lesser extent the Fantasy setting) is just damn great. It is rich in background with loads of good story-lines and characters, but for some insane reason the guys at GW are insisting on stripping the game more an more of this great background until the main game is more akin to a rather shallow boardgame and if you want to go into more detail and play fluffed games you have to revert to Forgeworld or the Specialist range.
At this moment in time I am very much in dubio about my involvement in this part of our hobby. Word and reviews concerning Dark Vengeance are rather good and the miniatures look the part. The discussion about the worth of GW is not over yet. I have noticed projects like old-hammer where people gather to play earlier editions of both WFB and 40K or similar and that appeals to me rather a lot.

Maybe in future rambling-post I'll delve into this a bit deeper, but for now I'll just sign off,

Listening to: "The Divine Wings of Tragedy" by Symphony X
Posted by Sander at 19:00 4 comments:

A while back I put up some pictures of my Amera Plastics Nissen huts which I had basecoated by then, well tehy're finished.

Here are the first photo's of some of HäT's new Spanish Light Infantry and Grenadiers. Both sets consist of 8 poses each and so I have split them up in two mixed sets one of which you can see here painted as the Principe Regimento d'Infanteria.

Some shots of the Light Infantry:

The grenadiers ( I really wish I could have done a better job of the bags of the bearskins...)