That's right people it's that time of the year for a short recap of last year. Also, the AHPC number IX is well on it's way and I have yet to post about my preparations for this grand event.

So let's start with the recap of 2018; what did I paint and what conclusions can we make out of this?

28mm Historicals:  15 figures, this is always a collection bin category in which figures can  be put that don't fit in with others. So yeah no worries it's okay.

CBT: 2 mechs; I will need to amend that during this year's Challenge.

Fantasy (28mm): 29 figures were done, mostly with the intention of using them with HQ

Heroquest: 70 miniatures done; ow jee that's even more than I expected myself...

So yeah, what to think of that? Basically the prime focus of 2018's painting was upon 28mm Sci-Fi and Fantasy, again mainly due to Herouest and the games played at the schoolclub. I need, or at least think I need, figures for specific scenario's or cards (more on the latter later) and as such it's a big drive for my painting. Recently I have taken the opportunity to get into those GW specialist games like Blood Bowl and Necromunda that I would have loved to own back in the days of tight gaming budgets and now am able to obtain. All these old games (or rather new depending on your point of view) also give me a chance to revisit old figures that now lie un-used. Necromunda has given me the opportunity to get out my old Gaunt's Ghosts which I have now primed to be painted and used as a gang in Vervunhive. The same is true for my Dark Angels: there's a new high quality toy store in town who now sell Army Painter and GW produce and asked me to paint their First Strike demo figures. I did and as reward I received a box of Primaris Intercessor marines. I painted 5 as Blood Angels and gave back to them to use as an alternative to the Vanilla Marines and the other 5 I gave to Arthur who now has fallen in love with Space Marines, rekindling my own obsession with the Firtst Chapter, many of which await painting eagerly. 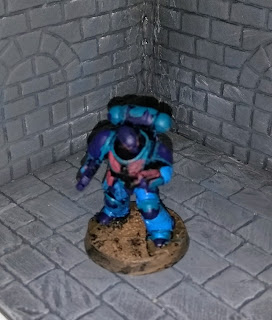 As for the Painting Challenge: I have put up our first post HERE and it's great fun to participate this year again. I plan to get quite some stuff done and since I am no longer a Minion (thank the Gods for that!), I might have actually got time to get a dent in the lead pile. 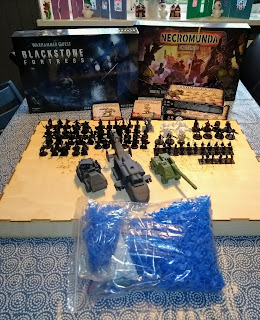 There's a few themes for what I want to paint in the Challenge, but I have no real plan like I wanted to follow last year and abandoned right from the start. The Challenge's own theme is "Fellowship" and strangely enough quite a lot of the things I want to enter are Fellowship related. Besides that the other theme is GW Boxed or Specialist Games with HQ, Necromunda, Blood Bowl and Blackstone Fortress all wanting my attention. Whether I will get into the Bonus-rounds is still under debate. It rather depends if I have anything appropriate lying around I will most certainly not get any new stuff for that as I did last year.

So there you have it. All the best for 2019 and happy painting!