Yup I have finally caved in and joined a Kickstarter project. The strangest part, perhaps is, that it's not a miniature Kickstarter. No I joined the Harebrained Schemes "Battletech Kickstarter" 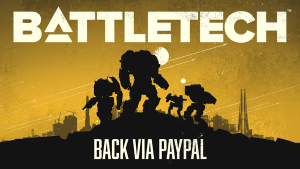 For about pretty much 15 years I have only played ONE computer game ever and that has been Mechwarrior 4 and it's extension MW 4 Vengeance. On my newest Laptop this game does not run, the MTX torrent didn't run either so I was terribly distraught. But here come the guys from HS to the rescue. They are developing a turn based single player version of the game which is a skirmish game at base but has now reached strechgoals for a single player Merc campaign to be added as well. For me (not having a credit card) it is great to be able to back this project through Paypall and so I did almost without a thought. Since I do not play PC games (or any digital games at all, they take away time from painting mini's and gaming on the tabletop) I am a bit afraid I will have trouble getting the hang of gameplay and also that my present laptop will not be good enough to run the game when it arrives, would just be my luck. But I guess we will have to take that hurdle if and how it turns up.

I am hoping this PC game will be a compromise between Mechwarrior and CBT itself and it sure looks like it.

So remember: "Mechwarriors do it in the cockpit!"