Some Dutchies and a prize...

Even though I have been marking tests for the past 1,5 week I managed to paint up most of the remaining WW2 Dutch troops I have bought a while ago from May40 miniatures. Still in the pile are 3 blisters with a HMG, stretcher bearers and officers. Anyway here they are together with the real time Dutch period helmet. I bought it right in the village where I live from a local collector and  it seems to be a 1940 version (last batch made before the German invasion) and from the colour inside it was initially made for the KNIL (Royal Dutch East Indian Army) but re-painted and issued to the draftees of 1940. 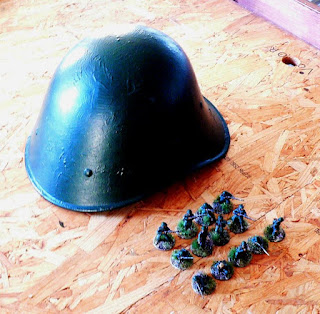 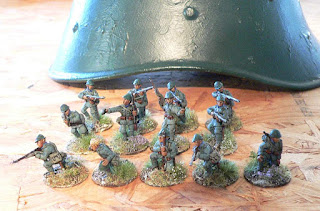 Last week the Challenge awards were announced and much to my surprise I won the 1500points threshold, which is a Warbases coupon for 20 pounds.Since I have acces to the laser-cutter at work, I pretty much can get what I need custome-made, that said I had my eyes on a brushrack for some time. Now I have also long been looking at their brilliant animal range and decided to get a badger, foxes and some wolves (Snake-eyes needs a Timber after all) and the Omnibus passengers set. I also got some two-coloured tufts and a brush rack. 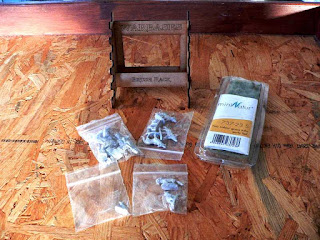 They turned up here with amazing speed: so thanks heaps Warbases for your excellent service, communication and products! I put up a banner to them somewhere here on the page.