It will not have escaped your notice that it's November 11th today. Here in the south of the Netherlands is the start of the Carnival season and as such steeped in mirth, booze and dancing people.
Yet this post is about remembrance. A few weeks ago I was in the UK with school as we visited Oxford and environs. The media were full of the "poppy" discussion, I wear one too, this is odd in the Netherlands because we were not involved in the Great War and many people do not understand. Well I teach history and if I can get pupils interested in the how and why of remembrance and keeping those who gave their lives for us alive in any small way I will.
So yes I wear a poppy (an enamel one bought in Ypres some years ago since you cannot get one here) to think of all those who have fallen, NOT because I am a warmonger or militarist. Wargamers are often accused of being fond of war and bloodshed, yet I think that warGAMING is a game in the first place and learning about history second. The latter also gives us a pretty good picture of just how gruesome war and battlefields are and thus we tend to look for peaceful solutions in real life. Like throwing dice to solve them ;-)

In the Netherlands we have Memorial day on May the Forth and Liberation Day on May the Fifth. At first these were to commemorate the Fallen from WW2 and to celebrate our liberation by the Allies. At present, in letter at least we commemorate all Fallen in armed conflicts since 1939, but in truth the emphasis is still pretty much on WW2.


The poppies below grew in our garden in late summer this year and are amongst my favourite flowers. In about two weeks I will take along 122 pupils to Ypres and Tyne Cot and show them just what War leads to and hope they will feel a bit moved at least and stand still to think about sacrifices made back through the last 100 years for our freedom now. 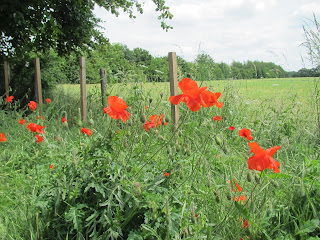 So Lest We Forget!

As said earlier; I have visited the Crisis Convention in Antwerp yesterday and it was a blast! We, as in my brother and me, arrived around 11.18hrs and went at it straight away. I had pre-ordered at about 4 different stores and so I was spared a lot of frenzied searching for the stuff I absolutely wanted to get. First up was Wargames Foundry where I bought their 2 Victorian Cyclists blister, the Chinese Tongs, 2 packs of Vikings and some Old West Townsfolk usable as Victorians as well. Due the fact I bought 6 packs I was awarded the Free Napoleon crossing the Alps figure jaaaay! Next came Annie (a.k.a the Dice Bag Lady) and boy how charming she is, a true pleasure to deal with. I bought her shieldmaidens and...yup I caved in again...the Frostgrave rulebook. Then I went up to Stronghold Terrain and Brother Vini's to get more Vikings; more specifically the main characters from the Vikings TV series.

I resubscribed at the WI stand and gained their 2 free miniatures to whit Simon the Montfort and Prince Edward.
At the bring and buy I obtained a copy of the FASA book "The Kell Hounds" I had been searching for it for years but wasn't prepared to pay the prices asked on Ebay in excess of $50,- I got it for €5,- me happy!

Johan from 20mm and then some made me 5 adobe buildings to be used with my 1:72 figures or at a pinch my 25mm Star Wars figures. They're great and deserve a post of their own so that will be forthcoming.

To top everything off I got a scenario book and Wargamers annual (2013) from Calliver books and a Gotrek and Felix audiobook from a friend. My brother and me made some pictures but most of them were overbalanced or unfocussed so here are the ones that did work out ok.

One of the tables I liked the best for sheer care of details and groundwork is this Arnhem table:

A table that certainly caught the eye was this large scale Napoleonic game:

This Dust table had incredibly well detailed terrain was very atmospheric, one would almost be tempted to start playing it.

Among some of the people I've met yesterday were some who I hadn't been able to see in the flesh before.
The Perry Twins attended the convention doing what they do best: make brilliant miniatures, in this case Colonial Infantry.

I also met up with Stefan from Monty's Caravan, a thoroughly decent and funny chap indeed!

The most important picture is, of course, saved for last, the loot:

I had a very good time indeed and can't wait to go next year!