The Siege of Vraks Part I

While Battletech remains my biggest gaming love and I "play", or more accurately, paint several historical games and periods, I also have a special spot in my hobby heart for the Warhammer Fantasy Battles and 40K lore of Days Gone By.

So it is that I have collected some figures for the huge Siege of Vraks Campaign designed by Forgeworld many years ago. I have quite a few Death Korps of Krieg troops (or stuff that can proxy as such), Inquisitorial Troops, Dark Angels (duhuh), Red Scorpions and some Traitor Guardsmen. 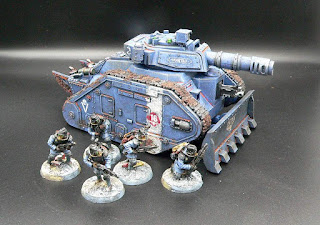 After a lot of time has gone by with me busy on other stuff, I finally found some time to paint test figures for my Death Korps troops. More importantly: I settled on a regiment and colourscheme, the 143rd.

My testers are the small Combat Engineer squad and a Leman Russ tank for the 143rd. The Soldiers are secondhand Forgeworld figures and the tank is a regular Leman Russ converted with a Kromlech Miniatures Trench rail at the back and a Space Marine light added as airfilter to the turret. 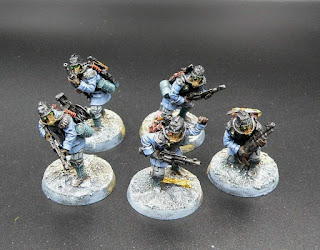 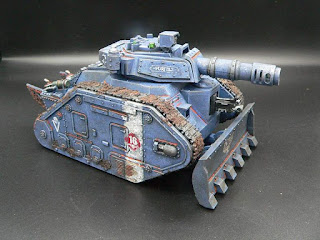 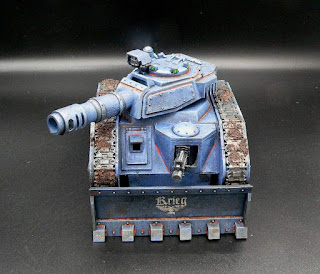 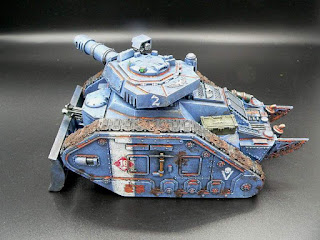 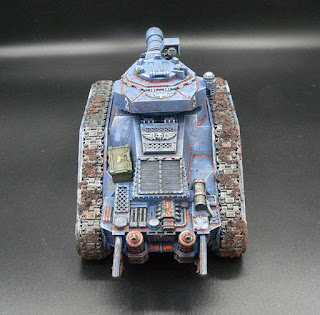 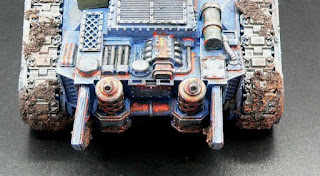 One could argue that I have added a lot of rust and mud to the Leman Russ model, partly that is because I am trying out my weathering skills and partly that is because the Chaos Forces at Vraks had a large continent of Nurgle followers amongst them responsible for releasing large amounts of acids and other chemicals that damaged men and equipement in alarming rates,. So I think I am sticking with the background and besides it gives a nice spot colour to all the blue.

The colourscheme resembles the WW1 French Horizon Bleu and I like that, even though the helmets and gasmasks are more reminiscent of the German forces in said War. 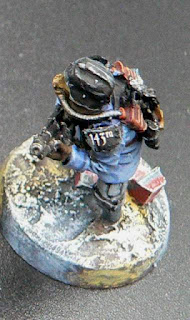 Decals on both the troops and tank are provided by Scum4bag Kustoms and both quality of product and service are awesome!

For now I am off to painting more WW2 Warlord Games Russians and Germans but I will be back with more of these chaps. While painting I have been checking out some youtube channels and would like to reccomend the following two:

You probably know of them aleady, but I just discovered them and like their enthousiasm and high quality productions. They almost make me want to create my own channel.