School's out for summer!

On this, the second day of my Summer Holiday I have received a package in the mail from Caliver Books with some nice things to read during these warm summer evenings. First is volume VIII of Fortesque's "History of the British Army" which details the year 1812 and thus the Salamanca Campaign. Next up is the Wargamers Annual Summer special 2015, very nice because of the fact it has many articles on subjects I would not get across without it. Last but not least are two little booklets describing the uniforms and orbats of the main players in the Crimean War. 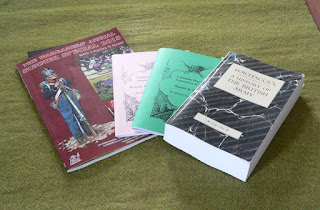 Yesterday evening I spent basing up what is left of my Late Napoleonic Prussian army and this resulted in 4 battalions of Prussian Reserve or Landwehr infantry and one regiment of regular infantry.

Here's a picture of the 4 battalions of Reserves. Now being a smartass, I have based them with grey primer and will dry-brush them in a brighter grey, wash them and pick out the other colours afterwards. I have no idea at this moment whether to depict them as 3 battalions of the same regiment (and 1 of another) or as 4 separate regiments but I still have time to think about this.