Last Saturday I participated in a great multi-player game of Dystopian Wars at the DUCOSIM Spring Con. JW or Pijlie was taking the role of GM and had devised a very entertaining scenario. 5 players would try to find a treasure located on a central island in an archipelago.

The treasures was hidden on the Island which held an exotic temple with six tiers, each step would take a token in order to make sure no booby-traps went off. 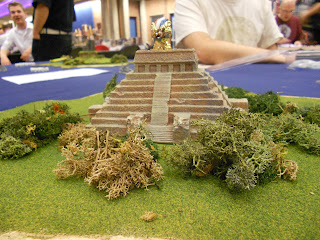 In order to get those tokens players had to land forces on the other Islands roll a D6 and see what happens. On a 1 you'd find a deserted island and get a token for free, on the others you'd get nasty surprises in the form of challenges. In order to land on the Isles each fleet could carry along Small Tank Tokens and could use it's Marines (Assault Points).

Now as said we had 5 players in no particular order: Gerco playing KoB, Michiel playing EotBS, AM playing the always annoying COA, Robbert playing KoB and me doing the same.

I wanted to try out my Vanguard subs and in the end got to ram one Japanese frigate which was cool but got me into a prolonged fight with Michiel which was too costly in the end.

I landed some troops on an island in order to get a token and lo and behold a mass of prehistoric monsters awoke and attacked me. It took me about 3 turns to get rid of most of them because I had to divide my attention and forces between them and Michiel who attacked me as well. In the end AM killed the beasts off and got the token.

As it happens I was the only one who had actually read the scenario rules up front (and perhaps Gerco whom I haven't actually spoken to all game because he was either on the other end of the table or flashing the bejeezus out of everyone with the flash of his sturginium camera.) and it was at this point I came to the realisation I didn't really need the token to get to the top of the pyramid: if I unloaded all my AP's onto the island and onto the same layer of the temple at the same time it would only coast me 1D6 casualties each time I didn't have a token so I could reach the treasure with a lot of AP's anyway... I have a cunning plan says I..

Meanwhile all hell had broken loose, everybody was shooting at everybody everywhere accept for Gerco who seemed to be sailing along nicely and getting ignored. So to cut the long story short: I got a reasonable amount of forces to the island ( a battleship, 3 cruisers and 3 frigates: carrying 21 AP's) and got the troops to the temple.

Before this happened I had to roll to see what kind of challenge I would be having: oh dear.. 3 sea-monsters emerged from the depths and I had to get rid of them to earn a token.

In the end I finished off two again with some help from AM and on ahead I went again. AM had an all flyer COA army and got some STT's and thus AP's onto the temple  as well, but I was one step ahead, the race was on!

We started playing around 11.00 o clock and it was now 16.17, the con was about to close at 17.00 so JW decided we'd only play out the race to the top between AM and me. Now in the end we reached the top, I had 13 AP's left and AM 2; guess who won the fight for the Treasure? So I ended up with the Golden Lion and a very nice day as well.

I know I have left out heaps of action and people and their battles but it would take 10 posts to cover the thing decently so sorry chaps!

Thanks to AM for the photo's and the movie, he sent me far more then the ones shown here but again for briefness I left some out. Michiel and I used our own fleets, AM played with JW's COA and Gerco provided his own and Robberts KoB fleets. Terrain was all JW's with some of my buildings added for the events and challenges rolled.

Listening to: My son testing his vocal cords... by me and the missus