OK, so after me moaning along for an hour or so last post, I think it's time to put the paint on the metal or plastic.

So first up are the booklets I managed to scrounge from the interwebs. I have a Hero Quest starter box and both the "Kellar's Keep" and "Return of the Witchlord" expansions, all in Dutch. They are mostly complete but no important parts are missing. 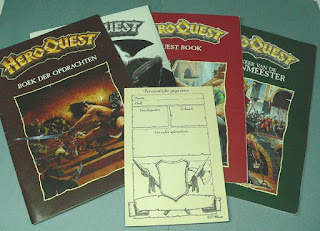 In the meantime I have also ordered a box of "Advanced Hero Quest" (without the miniatures), an Ebay lot containing most of the AHQ miniatures and a small lot of 4 old Warhammer figures to use as heroes.

Yeah I am in this bigtime...

From the get go I started painting up the mini's of the core game and here are the first of them in the form of the heroes. 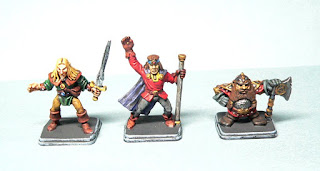 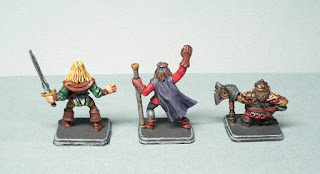 The Barbarian had his sword broken with the blade missing. So I put on a new blade and coated him, but he's not yet finished. 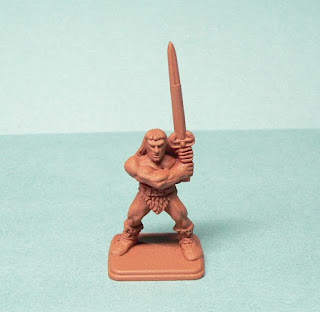 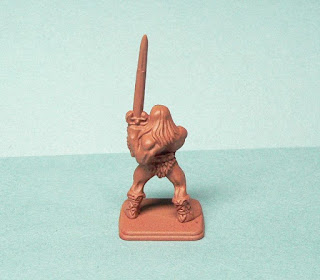 For a time I have played with the idea of replacing the bases for the new Renedra Frostgrave stone bases but after some trials with a Skellie and Goblin I do think I will keep the original figures on their bases and put all new figures that I will use for HQ on the Renedra bases.

Now on to more painting of figures and scenery, cheerio!
Posted by Sander at 20:21 4 comments:

While I have a huge aversion to "state-of-the-hobby" articles in the various magazines, I want shiny pictures of battles and miniatures not some old fart rambling on about he wants more youngsters to join the hobby, I will use this blog to ramble on a bit myself.

So in last post's comments, Rod mentioned he had no problem with GW, fair enough! But I do...it's not just the constant prise raising, nor the ever updating of core rules and codici (see I am still very much Old Skool) and not even the way they stop supporting older gamessystems, these are all bad in themselves but I think it goes even further than that.

When I started out in the hobby it was with 1:72 plastic soldiers, it still is btw, not as most of the Elders amongst us who started with Airfix ones, but with Revell, Esci and Italeri. I did own quite some WW2 Airfix figures but I found a lot of their poses spastic and the detail very shallow  compared with the other brands mentioned.

Our family's first stay in London brought us to Hamley's, a huge toy store on Regentsstreet I believe and next to the boxes of Revell and Britains soldiers, lay Prince August casting moulds. I bought about 4 of them and a starter casting-set. These were a blast and saw  me casting, painting and collecting a huge amount of Napoleonics I was able to wargame with, using no real ruleset but my imagination.

Fast forward a few years and both the self-made collection as well as the 1:72 collections had grown, I was still pretty much on my own and clueless about the wargames hobby. During a vacation in Kent, Maidstone I believe, we visited a bookstore and in the magazine section I found both an issue of Miniature Wargames  and the White Dwarf of that month. I believe both are still in my possession and will look them up for a future post. This White Dwarf set me on a different course altogether, it had a page with a storefinder on it and this made me aware there of two stores quite near my hometown. There I played my first games of WH40K and WFB. I also started to collect my first army: Dark Angels.

After this long prelude we have now arrived at the nucleus of my ramblings, if you are still with me I am sorry for the lack of pictures and cohesion in the story here, but I am guessing it is really about therapeutic relief for myself that I am writing it.

During my student years and the early days of adulthood, working as a teacher, my financial situation improved immensely  and when we moved to our present residence, I owned the following GW armies:
For 40K:
- Dark Angels
- Imperial Guard
- Sisters of Battle

I also owned Mordheim with 3 warbands and several figures just because I liked them. I have quite a lot of novels, mostly Gaunt's Ghosts and Gotrek and Felix, as well as a lot if sourcebooks. The immersion was very reall and satisfactory, yet cracks were already showing. As I played games regularly, having a steady circle of gaming friends at hand, I saw the use of updating the core-rules now and then, what bothered me more was that with each newly released modelline or race, the new figures were stronger/ better then the existing ones and thus the latter needed uptooling. Often this was done by throwing in new stuff that was not canon or from the fluff, this I resented. Being the eternal GoodGuy and always playing with a themed army, made me vulnerable  to power players and I usually lost my games. I can handle loosing games quite well, when I loose in entertaining  games from sporting opponents, but loosing 9/10 games got tiresome.

At the same time I was introduced to other games like Battletech and Warmachine. With little starting capital and just a few miniatures you could play immensely  enjoyable  games with just as deep a background, if not a better one...

Couple that with my close link with the HaT company who produced pretty much all the 1:72 plastics I needed and rules like WAB and The Great War to play with them and you can hopefully see why I was slowely being pushed away from the GW imperium.

Now GW changed management and went to the Stock market and it all went from bad to worse from there. The miniatures got more expensive, rules changed with the firing rate of a terminator assault canon and they introduced finecast. At the same time they introduced a horrible set of rules for Independent  Retailers to be able to sell their produce. I know/ have known quite a few of said retailers and they really were GW's best ambassadors. Ever so enthusiastic and helpfull they did not want you to buy more and more stuff for their own profit but really helped you enjoy the stuff you had bought and so ensured you would come back. A lot of them had to stop selling GW stuff or even close shop...

Back in my present place of residence I found some new friends to play with but due to lack of time we had only a few big WHFB games, most of our other games are quick and brutal skirmish games like LotHS, Fistfull of Kung Fu, X-wing and the like. But we still liked the GW games, be it we played with older versions of the rules not wanting to buy a new rulebook for just 3 battles a year. We had some great games where we waited to see whose army ran away first my Gobbo's or my opponent's Skaven.

Enter Age of Sigmar...What were they thinking? After Paul "Fat Bloke" Sawyer stopped being editor of WD I un-subscribed on the magazine but occasionally  bought a single issue to keep in touch and was appalled to see the beloved Old World being finished off seemingly without a second thought. Now perhaps my mind is getting less flexible  with the passing of the years or maybe I am more conservative in my hobby-tastes then I knew I was, but I could not think of a good, well funded reason for this. Oh yes I could see the economical reasoning behind it: try to fit in with other brands who had far simpeler rulesets and more lythe and modern looking figures. I also get you need simpeler rules to appeal to a younger audience and I even get it when designers want to add to the hobby with a legacy of their own, what I do not get is why they can't  exist next to each other.

While not all change is bad, I totally lost interest in GW games and sold off most of my armies, only my Dwarfs and Dark Angels remain since I could not bear to part with them. Now this has all come to the fore due to my rekindled interest in Hero Quest togegher wigh reading the WD's concerning the new 40K version recently released. Reading the last two WD's made me realise why it all bothered me so much, with Age of Sigmar all was done rather abruptly  and imho also messy. For me there seemed no good way to end it all for all the gamers involved.  I have participated  in several of GW's world-wide events, where you entered the results of your battles online and gained medals and the like. That was great fun and even if my side would have lost, I had great fun, they could have used such an event to end the Old World or not...

The events changing the 40K universe: the umptieth Black Crusade and the rift in the immaterium, as well as it's effects were better thought out but led to the creation of new uber-characters. and troops as well as the coming to life of the sodding Ultramarines Primarch. (BTW what's so great about the Vanilla Marines anyway?)  Anyway what bothered me about Age of Sigmar and the new 40K is the killing off of the fluff I liked! It was what kept me into the GW universe, with that background gone it's just no fun anymore. All the other issues I have mentioned are reall, but most disturbing to me is the loss of the atmosphere that was the Old World to me, perhaps that's why I responded so well to the wacky, corny and over the top "high fantasy" of Hero Quest. Inspired by a recent WD, the present format really is a pleasant read, I started painting 5 of the Dark Angels that are still in the unpainted pile, halfway through I lost interest, at the time I had no clue why I lost interest but now I think it's because I have no more use for them, the fun and fluff have gone. Some of my loose fantasy figures will probably  get a rescue from the lead pile now to serve in Hero Quest which is great since it means that they no longer are loose ends but integral game miniatures, actually  being used!

So a long and boring story I had to get off my chest, hope I didn't scare you away!