This post has been a bit longer in the waiting than I had expected but as usual life interfered. .

The new version of Killteam unboxed! Sometimes it's convenient to be one of the housepainters of your FLGS. When the owner of said store asked me if I would like to receive the new boxed set a bit earlier in order to write a promotional  "Unboxing review" I jumped at the opportunity. 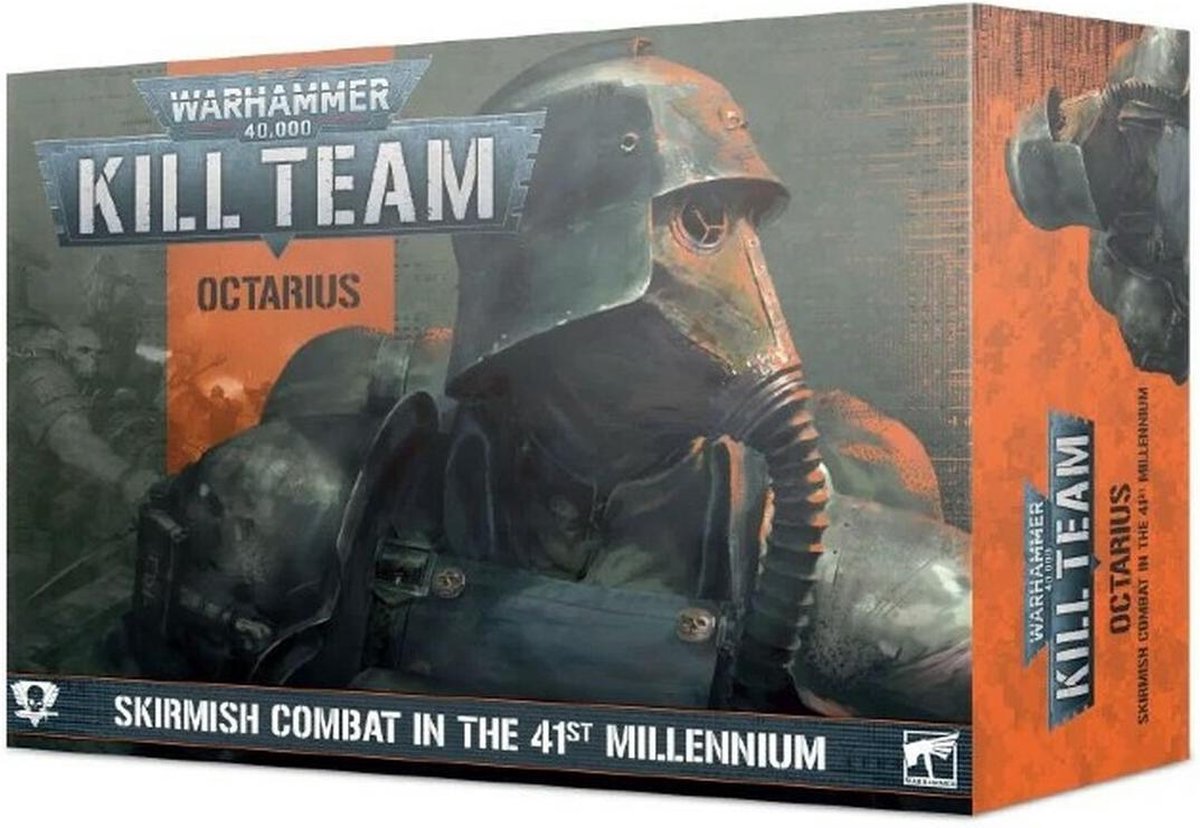 This new box contains a healthy amount of figures, terrain and other game necessities, I will try to describe everything as completely as possible. A thorough analysis of the rules will have to wait since I haven't had the chance to read the books fully yet., I can however say that there's quite a lot of deviations from the former version. Some of these can be gleaned from the website of the game itself Killteam . 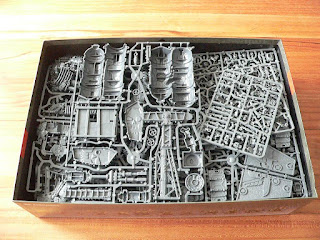 Upon opening the box, one is greeted by a large amount of sprues containing the figures and terrain pieces. Let's have a look at them shall we? 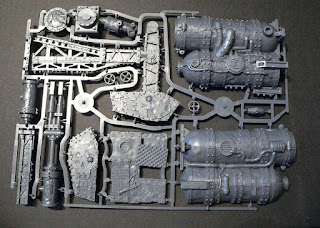 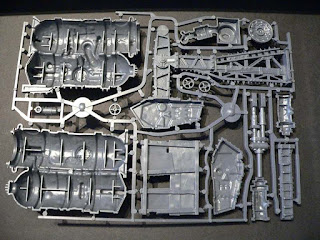 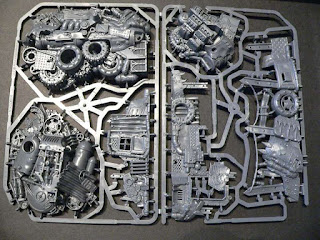 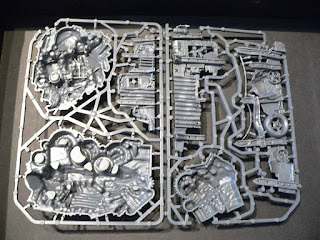 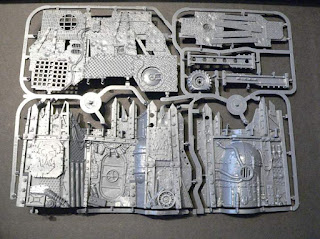 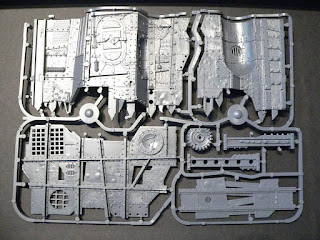 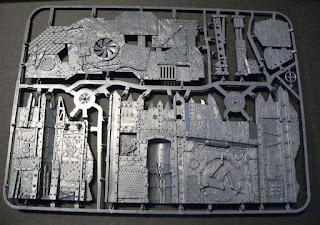 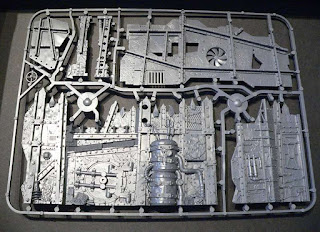 Some of the sprues are included twice in order to make two identical pieces. All buildings put together combine them to a large Orc Fortress.

The Death Korps of Krieg: 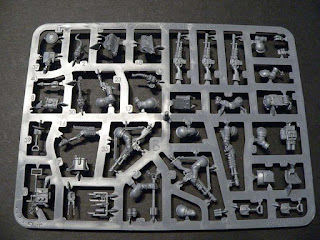 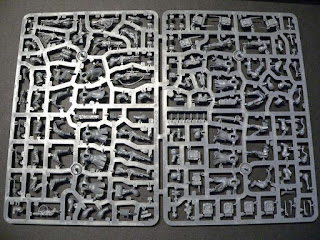 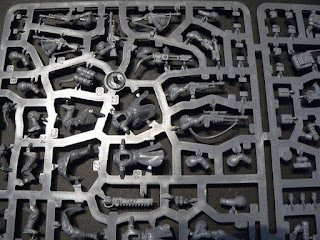 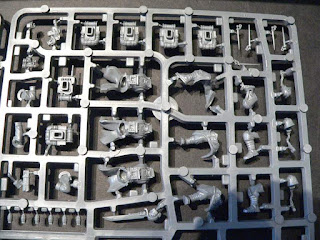 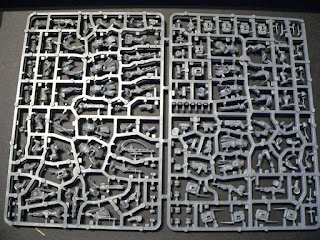 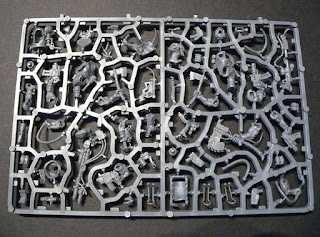 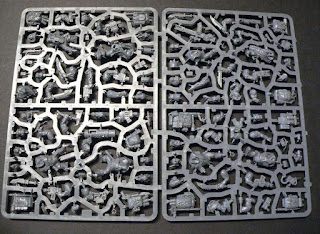 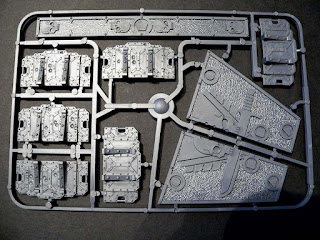 The sprues are separated from other game items by a cardboard devider with the box-art upon it. 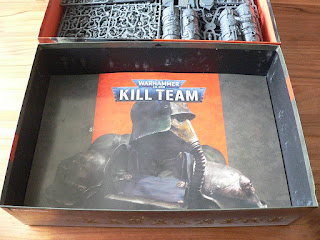 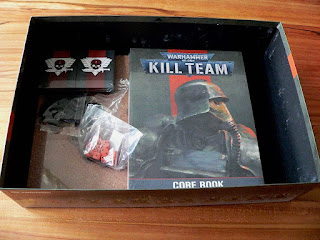 There's 10 dice (orange with black dots, without a faction logo those are available separately), cardboard tokens, two identical sets of cards, a sturdy cardboard playing board, printed on both sides and 3 books; a guide to put together the figures and buildings, the rulebook and a book describing the war in the Octarius Sector (is it strange that I call it the "ORCtarius sector" in my mind?) the latter also contains the rules for the Death Korps en Orc Killteams as well as scenarios for said Octarius War. 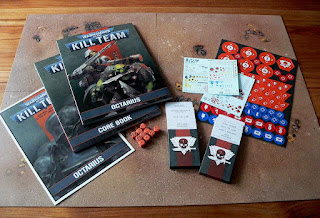 Finally two sheets of decals for the Orcs and Death Korps are included. The Death Korps sheet has markings for Infantry (regimental numbers) vehicle markings, campagne markings and markings to create a minefield. 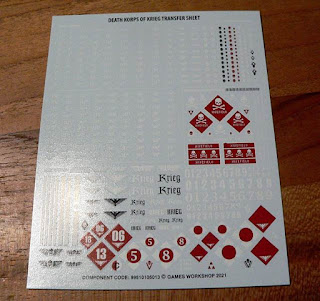 The sheet for the Orcs general glyphs and symbols as well as symbols for all major Orc Clans. 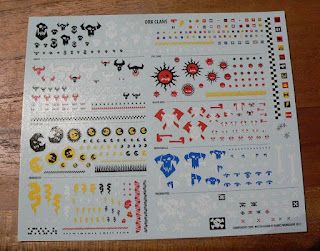 All contents are produced in GW's rather high quality apart from the dice, they look a bit cheap but suffice for their means. The figures are not mono-pose, which is nice, but the Death Korps figures are far more flexible then the Orcs. The latter basically have two arm- and head options, the arms of the DKoK figures are pretty much interchangeable between almost all figures.

Are there downsides to this set? Well I can think of a few; GW could have provided a zip-bag for the tokens and dice. The gaming board and buildings are distinctly "Orcy" while in theme with the Orctarius Sector it rather limits the use of them. I really do not understand the decission of GW to drop inches as a means to measure distances in place of the symbols used here.

In all I think the new Killteam is great value for money, quite a lot of shops have already sold out my FLGS, Het Hobbelpaardje in Roermond, still has some if you are interested.

Sometime soon I hope to be able to show some of the contents here on the blog. Whether I will be using them with the rules as GW has intended or with a different ruleset I really don't know.