A time ago I have mentioned I finished another Prussian 7YW regiment. While that's more or less the case, the term "finished" isn't technically true. When working the pictures for this post I noticed two huge mistakes that had hitherto escaped my notice. The drummer is missing his...well reason d'etre: his drum. Besides this glaring omission I also failed to add two more soldiers to the regiment making it 22 man strong rather than my usual 24. These faults will be corrected as soon as I have the chance.

Oh well. The regiment chosen for this project is the 13th Regiment von Itzenplitz. Uniform information and background was mostly taken from the still excellent Kronoskav website. I am aiming at recreating a brigade of Prussian infantry from the Orbat of the Battle for Lobositz and they were the second of it's regiments I have done up.

Today brings you, what I think might be an unexpected, surprise! I have quite a lot of boxes of Zvezda Samurai lying about and I finally got round painting some of them. Inspired by a colourscheme done by the much esteemed Mister Charles Murton, of "In Her Majesty's Name"-fame, for his new Daisho game. Since I never had a clear view as to what I wanted to do with all the mini's I have lying around I figured I'd try out painting some and take it from there.

The work of mister Cartmell and Murton doesn't limit itself to figures they're very talented terrain Senseis as well and I had a go at some fences made from bamboo sushi rolling mats.

Not sure whether I will finish this project any time soon, it's more of a trial project but it sure was fun painting something else than my usual fare.

Listening to: "Thickfreakness" by The Black Keys

It's the 4th of May again and just like each year this presents me with a bit of a problem: it's International Star Wars Day; but here in the Netherlands it's also our National Memorial Day... Personally I think both are worthy of attention, be it the latter one a bit more than the former.

So here are some pictures I took when driving through the Limburgian countryside last Friday with a dear friend who has actually restored a War time Willy's Jeep. First we visited the Eyewitness Museum in Beek.  This is a small private museum which has a very nice collection all put up in several diorama's using very lifelike dolls.

After that we drove up to the American Military Cemetery at Margraten. At the Cemetery, volunteers were actually busy placing pictures of the Fallen alongside their memorials. Literally putting a face to the suffering. As I find it rather respect-less to behave like a tourist and shoot thousands of pictures I only took 3 and here they are. 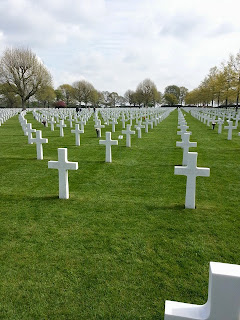 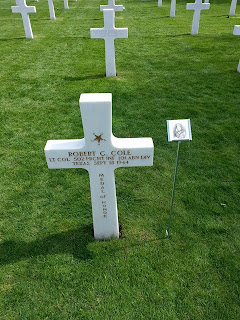 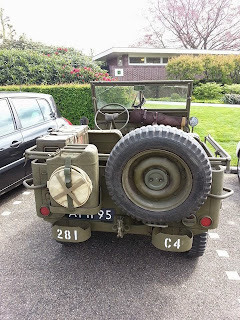 The picture above shows the Jeep. It really is a very great experience to be driving a vehicle 70 years old and still purring like a kitten. It is a bit chilly though...
And since we cannot forego the Star Wars obsession I suffer from here's a few pictures of a game I played last week with Mark. We had written our own version of the Kessel Run. 4 Smugglers (Firespray, YT1300, YT2400 and Hawk)  had to cross a meteor field, than escape a field of Black-hole flares and finally evade the Empire and leave of the opposing table edge. Mark's Firespray won, but only just. 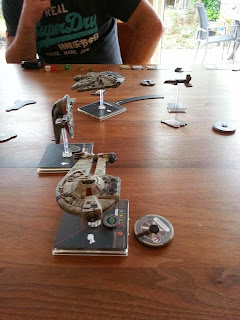 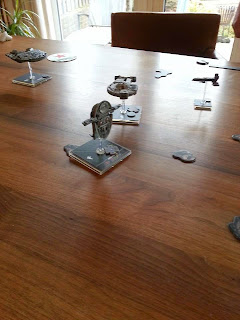 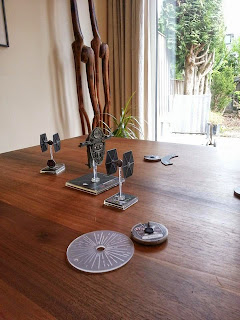