The 4th army for my showcase series is the Early War German army for the Great War. As usual we'll start with an overview shot:

The mass of Infantry, 3 companies of regulars plus some Jäger

Close up of an infantry company

Close up of the Jäger

Listening to: "Rock in Rio" by Iron Maiden
Posted by Sander at 17:14 2 comments:

Finally added a "labels" section to the blog. Now I've started out with the idea of labelling all old posts but stopped with that when I saw just how much work that'd be. So from now I'll just label all new posts and those are the ones mentioned in the brackets in the labels section ;-)

Listening to "The Idle Prentice" by Gin lane
Posted by Sander at 08:20 3 comments:

Last Sunday, Mark, Jan-Willem (Pijlie) and yours truly played a game of Black Powder Napoleonics. The game was based on capturing 3 objectives: both armies (French and Allies: Dutch, Brits and Prussians) needed to occupy a farm and crossroads and the Allies needed to destroy the French Artillery battery which the French had to prevent from happening. For me it was the largest game I played with my Napoleonic figures and I had to employ pretty much of all my late war troops. This forced me to supplement the French with a two battalion brigade of Württembergers which is pretty anachronistic but I just don't have more French infantry painted at the moment. I am doing something about that as we speak by the way. For Mark this was the first time with the BP rules and he wanted to have all of the basic rules pretty clear in his head up front, so I got a refreshment course as well, being a bit rusty on most of the rules myself.

Jan Willem played the French (General de Division Jean-Guillaume de la Flèche), Mark was at the helm of the Prussians (Herr General Oberst von Zinn zu Mann) and myself featured as Commander of the Dutch-British  contingent (General Alexander Offstreet), as the lads said: I've had a lot of fun coming up with them names so I couldn't stop myself mentioning them here.

Without further ado here are the pictures:

The set-up of the table, my gaming room was pretty much cramped up by the additional trestle table. 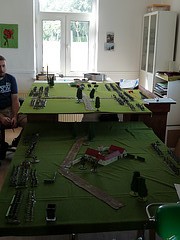 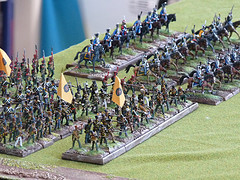 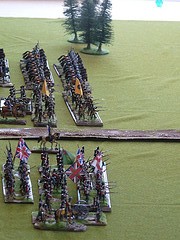 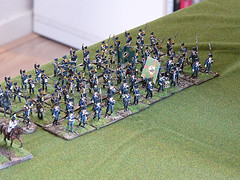 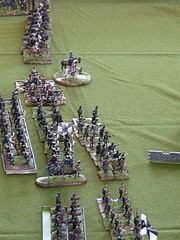 The battle is joined:

Mark and me discussing our next step

In the end the game went something like this: the heavy cavalry on the French right wing was being stalled by their Dutch Belgian counterparts and failed to make in impression, the Dutch-British centre marched towards the crossing and took on the artillery  head on. On the French left wing the Prussians managed to wipe out more then half of the division and since the French cavalry on the left, by then had two of it´s 3 units shaken that division was annihilated as well. The Prussian Jäger managed to occupy the farm early on in the game and the French were unable to get them out. So in the end half the French army was broken and the Allies had 2 of the 3 objectives in hand with the guns a turn away of being charged by the Black Watch... Jan Willem had no option left but to sue for peace...

Jan Willem and I also played a game of Great War but that I'll show you later on this week,

Listening to: "Ixnay on the Hombre" by The Offspring

For this Army Showcase I decided to take my oldest finished historical wargames army. Oldest in both chronological-  as in actual sense. I put this together for some games of WAB but haven't used it in about 8 years...

High time they should come out of the showcase right?

A block of regular infantry and allied infantry, I love the look of those massive shields

Regular missile, I actually have a few more of these but they didn't fit the picture right.

Guard Cavalry, I am also doing a Guard Infantry regiment but it has been sidelined for other projects for quite some time now...

The general in his Chariot, I also have a King and chariot waiting behind the screens but he's got sidelined as well.

All HäT figures of course.

Listening to: "White Elephant" by the White Stripes